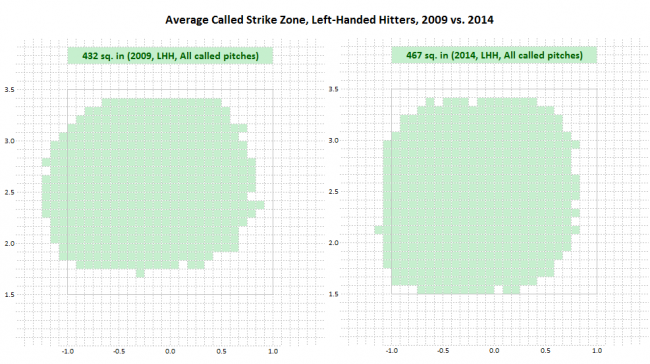 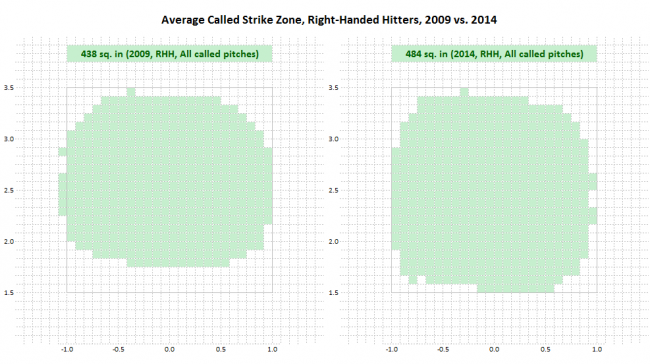 Although the whole piece was fascinating, two specific things jumped out at me. First, Jordan Zimmermann is highlighted in the cold opening as the antithesis of the low strike zone. Second, there were no current Tigers pitchers listed among those who stand to lose strikes due to the proposed rule change. 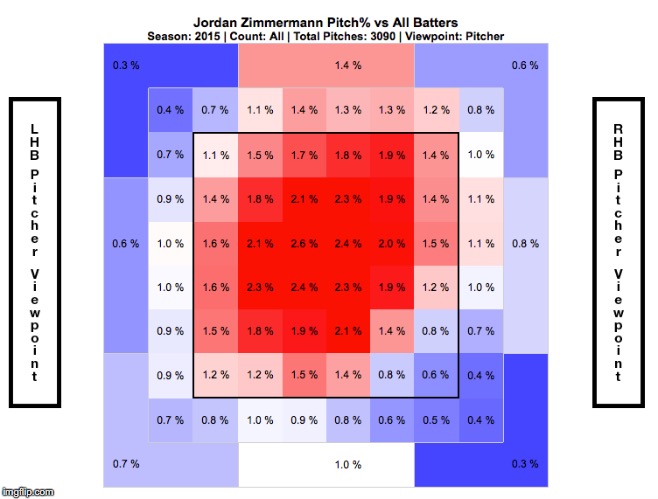 So I started to look into the number of low strikes called for each member of the proposed rotation (Zimmermann, Verlander, Sanchez, Pelfrey, Norris). I also added Shane Greene given that he was a starter last year and also has a propensity to work up in the zone. Using baseballsavant.com and their Pitch F/X database, I analyzed all of the called strikes by those five pitchers last season. Then, I determined what percentage of those called strikes were below 1.75 feet and compared those to the numbers of all MLB pitchers who threw at least 2500 pitches last year (ensuring to subtract those Tigers starters from the dataset). Surprisingly, all of them are below the league average for percentage of low called strikes. 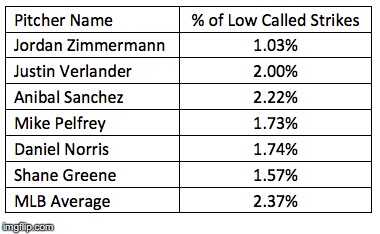 I calculated each starter's number of pitches per batter faced. Then, I used Fangraphs Depth Charts projections (combines ZIPS and Steamer) to estimate pitch counts for each individual in 2016. I subtracted their percentage of low called strikes from the league average to estimate a projected strikes over average solely based on an elevated strike zone.

Experts estimate that a change from a ball to a strike may be worth around 0.128 runs per pitch. If we multiply those 92 pitches by 0.128, we get about 12 runs saved. Given that 10 runs is roughly equal to one win, this may net the Tigers an additional win with the current rotation. Plus, throwing up in the zone may induce weak contact and increase a pitcher's infield fly ball rate. This makes sense as hitters would tend to swing "under" a ball high in the zone.

Not surprisingly, Norris had the 11th best weak contact rate out of 183 starters with at least 50 IP last year. Zimmermann and Greene rated 40th and 51st. Verlander, Sanchez, and Pelfrey are all in the top half of starters. In addition, Greene had the 10th highest infield fly ball rate. Verlander ranked 17th, Sanchez ranked 32nd, Norris ranked 33rd, and Zimmermann ranked 38th. Only Pelfrey was under 12% (ranking 147th at 6.8%). Having an eighth of your team’s batted balls as infield flies, essentially gimmes, has to be a good thing, right?

Unfortunately, the rule will not be approved until at least the 2017 season with the next Collective Bargaining Agreement. But if the roster doesn’t have to change anything to be a little bit more effective, that's just gravy.

Note: This post has been updated to include weak contact data, infield fly ball rate, and all of Shane Greene's statistics.