Detroit got bit by the injury bug this season, but recent seasons show they have actually been pretty fortunate when it comes to players being hurt.

Share All sharing options for: The Tigers weren't as limited by injuries in 2016 as you might think

A little while back, I took a look at how injuries affected the Tigers most recent season. When researching that topic, I came across some interesting information regarding how well the Tigers have fared when compared to the rest of Major League Baseball. The league-wide information was a bit much to include in the original article, but I found some graphs so pretty I couldn't help but use them somewhere.

The 2016 season may appear as particularly unlucky, but that might be because the Tigers have been pretty fortunate on the injury front over the last several years.

The graph below, from ManGamesLost, charts team wins and total games missed by players on the disabled list from 2010 through 2015. Additionally, it measures the cumulative quality of the injured players by using the Lost-WAR metric which sounds about like what it is: a way to measure the Wins Above Replacement lost by an individual player's injury. It is explained in more detail on the FAQ page here in case you need a refresher. Summary: the bigger your circle, the more your team was negatively affected by the injury. 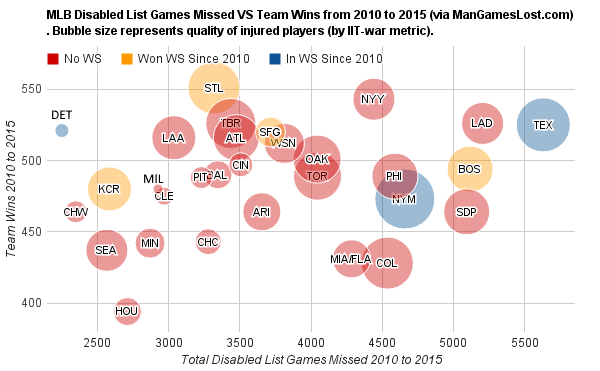 See that teeny-tiny circle all the way over there on the left for the Tigers? That’s good. They have suffered the fewest total games on the disabled list combined with one of the smallest negative impacts. This is another figure that might help put the perception of injuries this year into perspective. Compared to all but a few other fan bases, Detroit has been fortunate. Complaining about injuries as a Tigers fan would be like telling the guy next to you in the full body cast that he wouldn't believe just how hard you stubbed your toe while getting another beer from the fridge the other night. 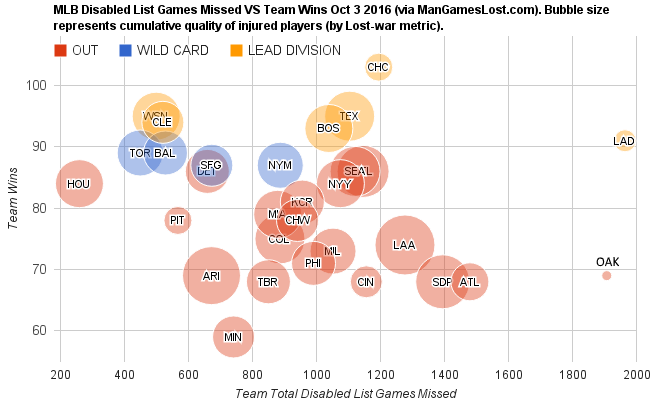 The home team did not fare quite as well as they had in previous years, but they still weren’t in terrible shape. There were only six teams that had fewer total games missed, and when you compare the Tigers to other teams with similar wins, the cumulative quality of the players who were injured is equal or lesser than a lot of those teams.

Using the Injury Impact to Team or IIT measurement, which attempts to measure the impact of an individual player's injury, (The higher the number the greater the injury. Again explained more thoroughly on the FAQ page here), Detroit finished in the middle of the road for all Major League Baseball teams in regards to how their injuries affected their season.

They lost 1.83 WAR (with 16 teams finishing with a greater number) and an IIT lower than two playoff teams in the San Francisco Giants and the Toronto Blue Jays.

While this was an exceptionally high injury season for Detroit, when compared to the rest of the league it was pretty average, and we saw other teams with arguably worse injuries manage to finish in a better position than the Tigers. So, yeah, injuries sucked this year, but it could've been worse.