Shane Greene was really bad at the end of 2016. Injuries might be why.

What exactly caused his struggles, however, is hard to define.

Share All sharing options for: Shane Greene was really bad at the end of 2016. Injuries might be why.

After two seasons in Detroit, it feels like Shane Greene has yet to find his home. Greene joined the Tigers during the 2014 offseason, hoping to serve as a solid back of the rotation contributor. After starting well, Greene experienced a lot of struggles and was sent down to Triple-A Toledo in June 2015. He made it back to the majors later that season, but ended up missing the end of the year due to a shoulder injury.

The decision to move Greene into this role looked brilliant at first. Though the numbers were not exactly dazzling, Greene found success for the majority of the season. His ERA was a bit high, but his FIP indicated that he was pitching better than his run totals suggested. Through early August, he owned one of the better strikeout rates on the team, and his 7.22 RE24 and 1.74 WPA during this span also ranked among the best on the Tigers’ staff.

Greene suffered an oblique injury in early August that sidelined him for a week. It was minor enough that he appeared in 18 games afterward down the stretch, but he was hardly the same pitcher after this injury. In almost every key statistic, Greene took a step back. His ERA, FIP, strikeout rate, and walk rate all regressed, and his RE24 and WPA fell on the wrong side of zero.

However, keying in on exactly what went wrong is difficult. Most of his troubles can be tied to his jump in batting average against (.209 to .329), but his rise in FIP means that there was likely another component other than balls in play.

At first glance, hitters were not finding significantly more success against Greene when making contact with the ball: his soft, medium, and hard contact rates were essentially the same before and after his injury, and hitters continued to hit the ball to the pull and opposite fields with the same consistency as well.

One place to look for a problem would be his velocity, but Greene did not show any real drop-offs during the last month of the season. Similarly, all of his pitches were fairly consistent in both horizontal and vertical movement throughout the year. His heat maps show that he generally threw his pitches in the same parts of the zone after his injury, and his strike rate was slightly lower but not by a large margin.

Taking it down another level, a few nuances do stick out when looking at Greene’s individual pitches. After coming back from injury, he threw every pitch more often that before his injury except for his cutter. Notably, this is the only pitch that showed an increase in whiff percentage during the end of the year. Almost every pitch showed a decrease in ground ball and fly ball rate and a rise in line drive rate, except for the cutter which moved generally in the opposite direction. His four-seam fastball and slider rose in batting average against by over 100 points and slugging percentage by over 200 points. His sinker and cutter showed milder increases in these areas, but every single pitch was less effective during the end of the year. 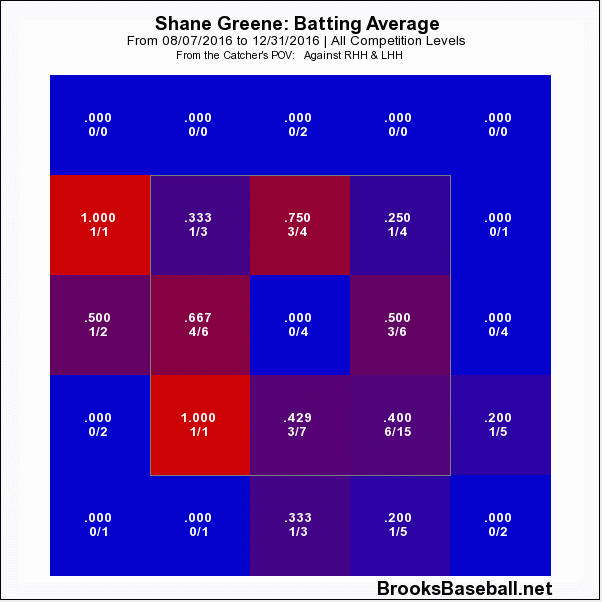 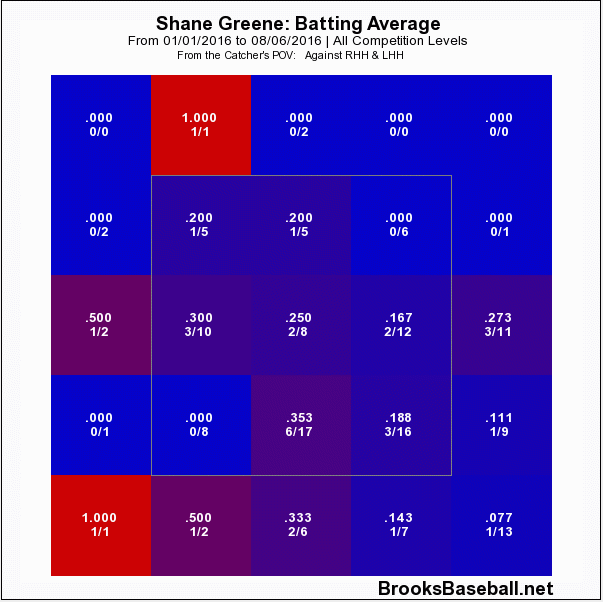 While Greene maybe should have thrown more cutters, his issues at the end of the season go beyond pitch selection. It seems like most of his failures can be traced back to execution, with a lot of that coming in the heart of the plate. For example, opposing batters hit just .206 against him in the middle of the zone to start the season, which is very strong considering the location. After his injury, this number jumped up to .440, accompanied by a decent rise in power.

Line drives also became more prevalent to end the year, and an increase in line drives almost always results in an increase in hits. To begin the season, opponents were only finding luck creating line drives on pitches near the bottom of the zone, while very few balls in play hit from the middle of the zone or higher had the same results. This was basically flipped in the second half of the season, as hitters feasted at the top of the strike zone, finding substantially more success in driving the ball.

Pitch placement and line drives are only reactive measures to explain Greene’s shortcomings, but they do show at least part of the picture. The reality is that he was probably never truly healthy to end the year, and while his velocity and movement were still there, his command and deception was much less effective. Year Three in Detroit will be another challenge for Greene, as he is probably looking at yet another different role on the Tigers’ pitching staff. He has shown the ability to be an effective reliever, but a lot of eyes will be on him at the start the year after a dismal ending to 2016.