Detroit Tigers links: Which bad team would you watch?

Braves? Reds? Somebody in the American League? Tell us. Then go tell Grant, too, since we're borrowing his idea.

Share All sharing options for: Detroit Tigers links: Which bad team would you watch?

Grant Brisbee asked an interesting question at SBNation.com on Monday afternoon: Which bad team would you watch on purpose? Grant offers up four suggestions to choose from: the Braves, Phillies, Reds and Brewers. A pair of NL Central and pair of NL East teams. I guess that's a good commentary on the balance in the American League.

It's never too early to get ahead of the curve on a bad team on the upswing, right? That's hipster baseball fandom at its finest. Think of all the Royals fans before the Royals were winners, the Rays fans before they were winners. The Astros have had backers since bringing Kevin Goldstein, of the Internet, aboard in 2012, and they surprised everyone by reaching the playoffs ahead of schedule. Get on board with the Braves while you still can!

You'll likely find the Mariners a common answer around here. Are they bad? Well, probably not. And they don't even have Austin Jackson now! (Although they do have Joaquin Benoit!) But we as a blog seem to have made some good friends with Lookout Landing, so Go M's in 2016!

The Tigers found batting in front of Miguel Cabrera should lead to seeing better pitches. Lucky Justin Upton! Chris McCosky wrote a nice profile of Colin Kaline, grandson of Tigers great Al Kaline, trying to make his own way. Brian Manzullo wrote that the Tigers' spring training record might matter. (Oh, and I wrote something about predictions, projections, and that we are all clueless.) Miguel Cabrera attempted to match Justin Verlander's taste in cars by driving ... a golf cart. Chris Iott's noticing some fun stuff this spring.

Ian Desmond turned down the Nationals' qualifying offer, which would have paid him nearly $16 million. Now he's signed a one-year deal with the Rangers worth a paltry $8 million, and he'll be forced to change positions, from shortstop to outfield.

The Diamondbacks are creating a dog-friendly ballpark

First, this may be the greatest paragraph Craig Calcaterra has written. Well, this week anyway.

There are people out there, believe it or not, who like dogs. I know, right? All of us normal, upstanding Americans doing what we can to make our country great by owning cats and yet some people still think that dogs are the better choice. I mean, good for the dogs â they're innocent in this and at least someone is looking out for them â but the judgment of people who prefer them to cats is one of the greatest threats to our country. What's next? We let them play center field? Perish the thought.

Dog owners can bring their pets to Chase Field's "PetSmart Patio" during the team's 13 Sunday home games. Don't have a dog? There's an adoption station to help create new canine-human bonds, as well.

Troy Tulowitzki is pissed at the Rockies

Blue Jays shortstop Troy Tulowitzski told USA Today's Bob Nightengale his former team, the Rockies, lied to his face, and for that he will not talk to the team's executives again. "You get lied to, straight to your face, you get upset. I believe in forgiveness, but at the same time, I don't plan on being friendly with them, or anything like that." Tulo also said the Rockies' spring training home in Arizona was more like a country club and that Dunedin, Florida, where the Blue Jays play is "the way it's supposed to be."

Bo Jackson got ejected on purpose

Bo Jackson may have been my favorite non-Tiger when I was growing up. In fact, there's a photo to be found of me wearing shoulder pads and holding a baseball bat over them like the famous Jackson photo. Fortunately my mom doesn't know how to use the Internet and cant't share it. Anyway, Jackson recently told EPSN he'd choose to get ejected to spend a little more time with his daughter.

David Ortiz is even blingier than Yoenis Cespedes

Yoenis Cespedes is blingy. Very blingy. But David Ortiz showed up to photo day wearing this gold and diamond necklace in honor of his 500th home run (via Over the Monster): 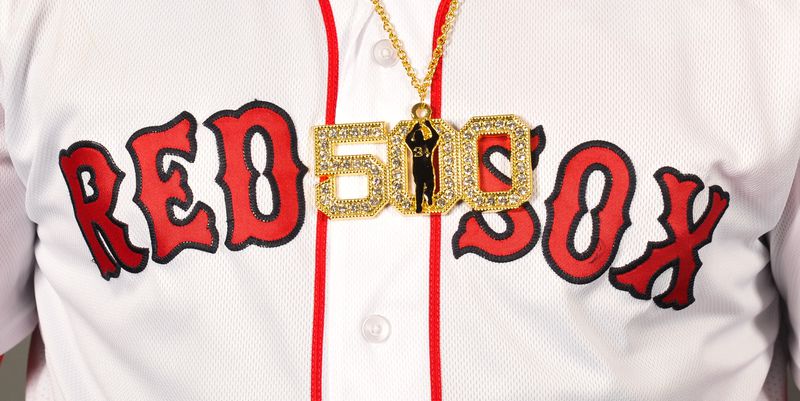 @AdamRubinESPN Yes I was at SLC Fair and he purchased my grandsons Grand Champion hog. Great guy and lovely family. pic.twitter.com/tbWDZZaxLV