Here's how Miguel Cabrera got out of his early-season slump

Cabrera's rough start to the season stemmed from the way he was being pitched and when he chose to swing.

Share All sharing options for: Here's how Miguel Cabrera got out of his early-season slump

There will come a time in Miguel Cabrera’s career when the Detroit Tigers’ slugger will no longer be one of the game’s elite hitters. While this is unlikely to come anytime soon, skeptics will jump on any opportunity to pounce on any moment of decline. So when things looked grim for Cabrera 17 games into the season, trigger-happy pessimists announced that this could be the beginning of the end. Cabrera promptly responded the next evening by hitting two home runs against the Athletics, reminding everyone of what he is capable.

Make no mistake about it, Cabrera’s numbers to start the year were rough across the board. A slash line of .206/.296/.302 is a bad slump for an average player, let alone a future Hall of Famer. His .260 wOBA and 61 wRC+ were nowhere close to his career numbers, and for reference, only one qualified hitter last season -- the Diamondbacks’ Chris Owings -- ended the year with less than 61 wRC+.

However, there is no reason to fret over a 17 game sample. The mantra of the beginning of the season is always "small sample size" and for good reason. Two metrics suggest that part of Cabrera’s early struggles were simply due to back luck. One was his .245 BABIP, which is much lower than his career .348 figure. The other was his 7.1 percent home run to fly ball rate, which is also a significant drop from his career average of 18.8 percent. Unsurprisingly, Cabrera has seen both of these marks jump up since then, and the rest of his numbers have risen as well.

What was the main cause for Cabrera’s rough start? The first clue comes from the location of the pitches he faced. Throughout his career, pitchers have had a very clear strategy against him in terms of location. The vast majority of pitches he sees are toward the lower part of the zone, and many more pitches are on the outside part of the plate. This results in the most frequent pitch location being low-and-away, which makes sense when facing a hitter like Cabrera. 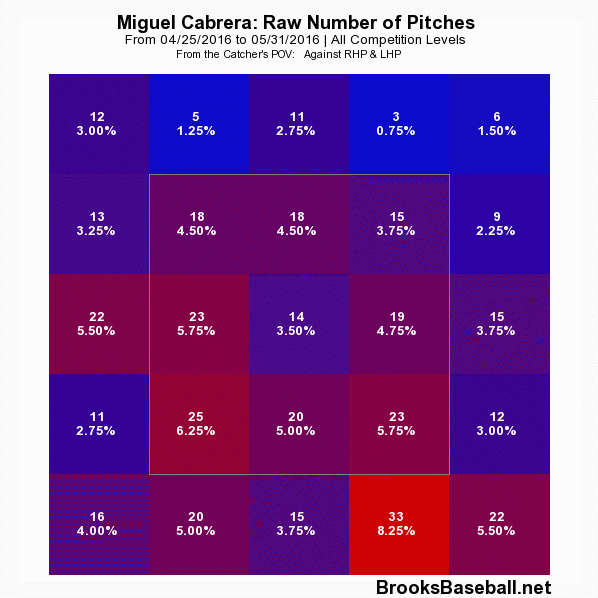 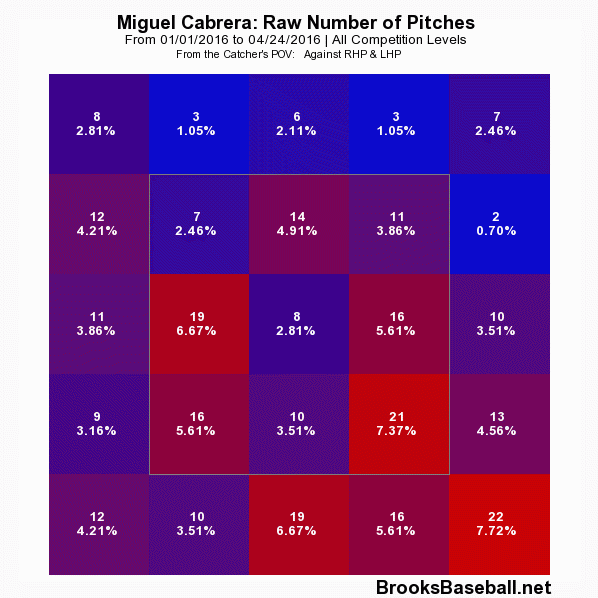 With this is mind, it was a bit surprising to see how teams chose to pitch to Cabrera during the first 17 games of the year. While there was a tendency to go down-and-away, there were also a good number of pitchers thrown on the inside part of the plate and even within the strike zone. Though Cabrera has still seen more pitches on the inner half during the past month than he normally does, the pitch distribution is much closer to what has existed over the course of his career.

It gets only more curious from here. If you measure Cabrera’s career success by batting average, his best area in the zone is obviously down the middle of the plate. However, he also has strong numbers on the inner part of the plate and the lower middle as well. This is a big part of why pitchers choose to aim toward the other side of the plate when facing him.

But as noted in the previous section, Cabrera actually saw a much higher percentage of pitches on the inner section of the zone during his slumping part of the season. It was not a few weeks into the season that pitchers reverted to peppering him on the lower outside part of the plate. The cause of this change in approach is uncertain, but it should be noted that Cabrera fared very well on pitches down-and-in against Oakland, which started his current hot streak. 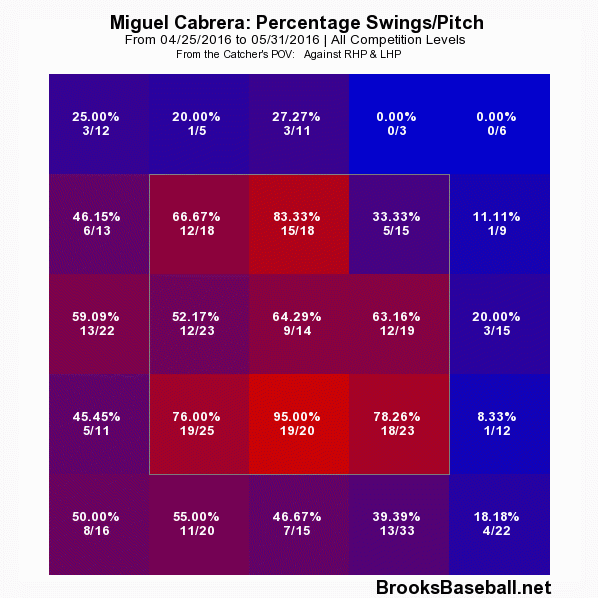 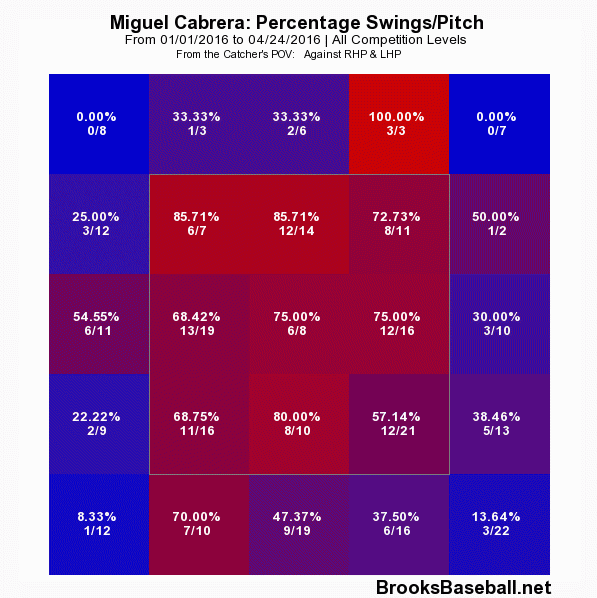 Historically Cabrera’s swing rate looks a lot like his success areas. He swings frequently over the heart of the plate and also enjoys pitchers on the inner half. But during the first 17 games of the year he did not show this trend, swinging at more pitches away than in. Since then, he reversed himself back toward his normal numbers and has preferred to attack the inner half of the zone. Accordingly, it was extremely curious to see him swing more frequently at pitches away to start the year when he was actually seeing a higher rate of pitches on the inside than usual.

From both a pitching and hitting perspective, Cabrera's first 17 games of the year seemed completely backwards. Pitchers were unafraid to go to the inside part of the plate where he has done so much damage, while Cabrera seemed less interested in swinging at these pitches. One reason for his hesitancy is highlighted by how much he struggled on these inside pitches. 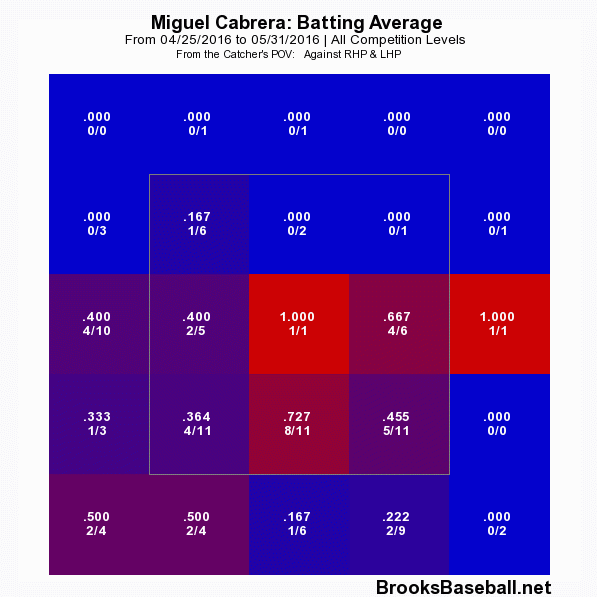 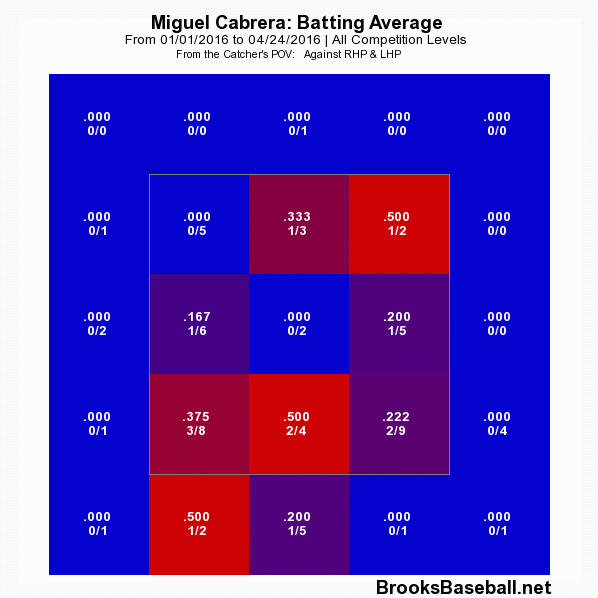 Not so surprisingly, Cabrera’s last 28 games have featured him finding success in the typical places. His swing rate and batting average have returned to this career levels and suddenly everything seems back to normal. Two questions still remain, though, and which caused which is still uncertain as well. Why were pitchers more willing to throw inside to Cabrera to start the year when he has done a ton of damage there? And why did Cabrera chose to swing less frequently at these pitches when he has been so eager to swing in the past?

Perhaps the answers relate to the number of off-speed pitches he was receiving -- about 42 percent of pitches he saw -- which is a change from his career 34 percent rate. Over the past month this number has fallen down to around 33 percent, which may have contributed to his increased success. Or maybe Cabrera was trying to find a new approach. 40 percent of his balls in play to start the season when to right field, which is ten ticks above his career average. Since then he has brought the figure back to under 30 percent, which is much closer to normal for him.

Slumps should not be unexpected for any player, even the great ones, so overreacting about a season’s first 17 games is foolish. However, it was certainly curious to see pitchers try a new approach against Cabrera and even more curious to see his response. Both of these trends have since reversed course, and the fears have subsided completely, but that does not make his start to the season any less fascinating.