A healthy Martinez is bad news for the rest of the American League.

Share All sharing options for: Victor Martinez is healthy and crushing baseballs again

It is indescribably great for the Detroit Tigers to have a healthy Victor Martinez batting in the cleanup spot for them. When a hamstring issue kept him sidelined for a good chunk of spring training this year, the fanbase collectively cringed.

Thankfully, Martinez returned in glorious form. He has picked up right where he ended 2014 when he finished runner-up for the American League MVP Award. So far this year he's hitting .341/.396/.625 with a wOBA of .433 and has been worth 188 wRC+. On top of that, he was recently named the AL Player of the Week after slugging three home runs and posting an absurd OPS of 1.604 in seven games between the Oakland Athletics and Minnesota Twins.

It's early, but it seems that Martinez's disastrous 2015 was entirely due to injury. Coming into Thursday's game against the Indians, nearly 63 percent of the balls Victor had put into play this season traveled at 90 miles per hour or greater. Last season, that figure was only 48 percent. His average exit velocity was only 88 miles per hour, lower than Alex Avila and James McCann.

This year, a healthy V-Mart is producing an average exit velocity of nearly 92 miles per hour, and has a 1.066 OPS and .450 wOBA against right-handed pitchers. He did not have the ability to turn hard on pitches and drive the ball when batting left-handed last season. Power is generated in a batter's lower half, and when a hitter can't transfer his weight from his back leg, he can't get any juice behind his swing.

Because Victor's left knee is healthy, he is able to do a lot more from the left side this year. He has always shown spectacular plate coverage, but he wasn't able to turn on many inside strikes last season. While he has historically swung more often at outside pitches, he is swinging at more inside strikes in 2016. 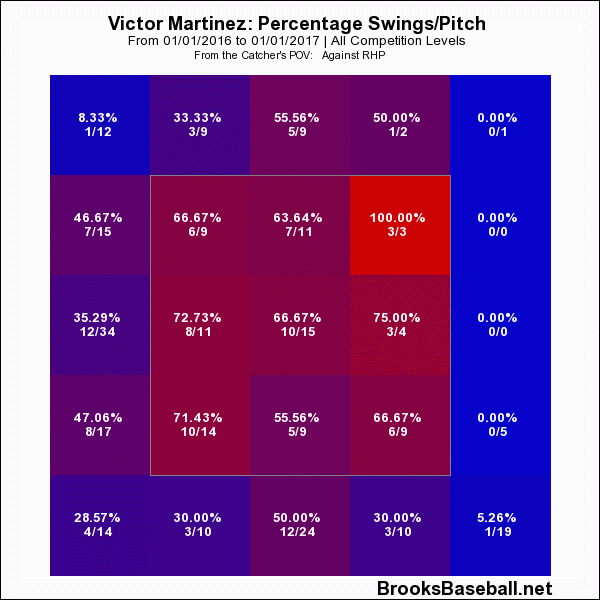 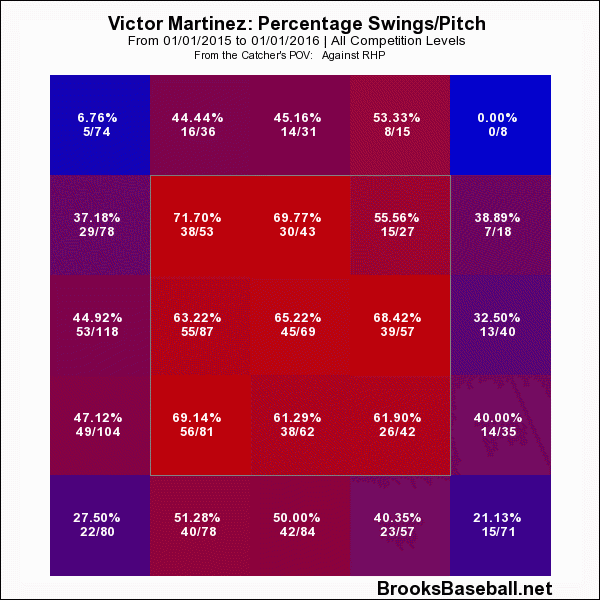 As you can see, he has taken a cut every time a ball has been in the high-and-inside part of the zone. Last year, he didn't have the bat speed to get around on those pitches, and only swung at 55 percent of them, his lowest mark in any section of the strike zone.

The same can be said about pitches that are down and in. While the difference between 2015 and 2016 is not as pronounced, it is still telling. Martinez did not have the bat speed to drop the bat head on pitches low and inside last year, and therefore didn't swing at them as often.

For his career, Martinez typically doesn't swing at the high and inside pitches, and he rarely swings low and in. However, Victor is taking healthy cuts at both pitches so far. On balls on the inner half of the plate, 11 of the 23 he has put in play have been hit at 90 miles per hour or above. If you dive even deeper, six of the 10 balls on the inner third of the plate have been hit between 94-102 MPH, with two going for home runs.

So far in 2016, Victor Martinez has been one of the most dangerous hitters in Major League Baseball. While it's hard to project him for another 30+ homer season like in 2014, he is certainly going to remain a very productive hitter by getting on base at a high clip and driving doubles gap-to-gap. So long as the Tigers can keep him healthy all season long, he should continue to make this one of the more dangerous lineups in baseball.