Michael Fulmer looks to keep rolling as the Tigers and Blue Jays kick off a three-game series.

Everything you think you know about the 2016 Toronto Blue Jays is wrong. The offensive juggernaut that powered them to the 2015 AL East title is no more -- or currently dormant, at least. The once-mighty Blue Jays offense has been a below average unit this year, with a team 96 wRC+. They are still hitting some home runs, but have the third-lowest batting average in the league, with below average on-base and slugging percentages.

Meanwhile, their pitching staff ranks among the very best in the American League. A starting rotation that was perceived as the Jays' big weakness after David Price's departure currently tops the league in innings pitched, FIP, WHIP, home run rate, and fWAR. They're also impressive to old school fans, ranking third in wins (24) and second in ERA (3.54). The bullpen has been adequate, and it helps that closer Roberto Osuna is 13-for-14 in save opportunities.

The Jays are red hot right now, too. They lost five straight games in mid-May -- including two in that well-publicized series against the Texas Rangers -- but are a blazing 12-4 since then, including five consecutive series wins. The Tigers have nearly matched them, with a 13-7 record in their last 20 games, so something will have to give in this series. Can Michael Fulmer and the Tigers pick up their fourth straight victory on Monday?

No Blue Jays starter has been more surprising than J.A. Happ, who has led Toronto to wins in seven of his 11 starts this season. Happ is currently enjoying a late-career renaissance in the Rich Hill vein, though his avenue to success isn't as easily identifed. Happ spent the latter half of the 2015 season in Pittsburgh with pitcher whisperer Ray Searage, who has helped many a discarded hurler find success in recent seasons. Happ posted a 1.85 ERA and 2.19 FIP in 11 starts down the stretch, striking out over a batter per inning along the way.

Happ's strikeout rate has fallen dramatically in 2016, but he is still making hitters uncomfortable, resulting in a 3.06 ERA. Opponents are batting .234 with a .301 on-base percentage against him this season, well below the .254/.324/.417 slash line he has allowed throughout his career. His batted ball rates haven't changed all that much, however, and the pop-up surge he enjoyed in Pittsburgh seems to be no more.

So, what gives? Advanced metrics like xFIP, SIERA, and Deserved Run Average (DRA) all think Happ is bound for regression, as each stat is at least one-and-a-half runs higher than his ERA. FIP is also skeptical, at 4.20, and ZiPS projects a 4.46 ERA for the rest of the season.

There might be something, though. While Happ hasn't induced any more weak contact out of opponents than usual in 2016, he has continued something he picked up from Searage and the Pirates in 2015: pitching inside. In particular, Happ has used his fastball inside aggressively against right-handed hitters this season, resulting in a .243 batting average against, a slight improvement over his career norms. 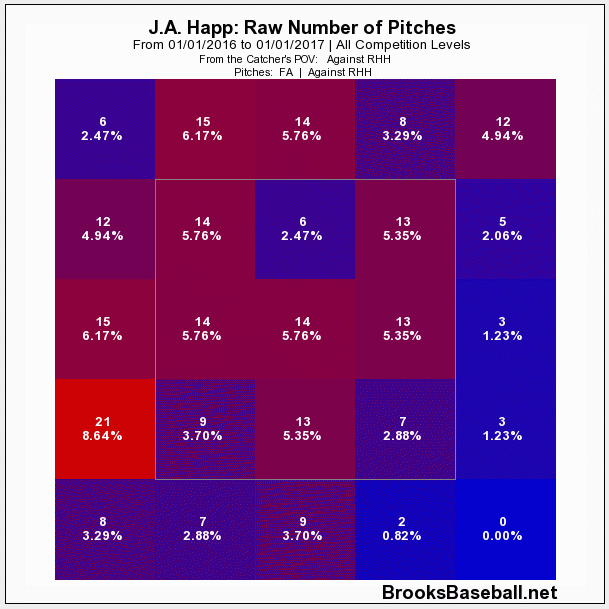 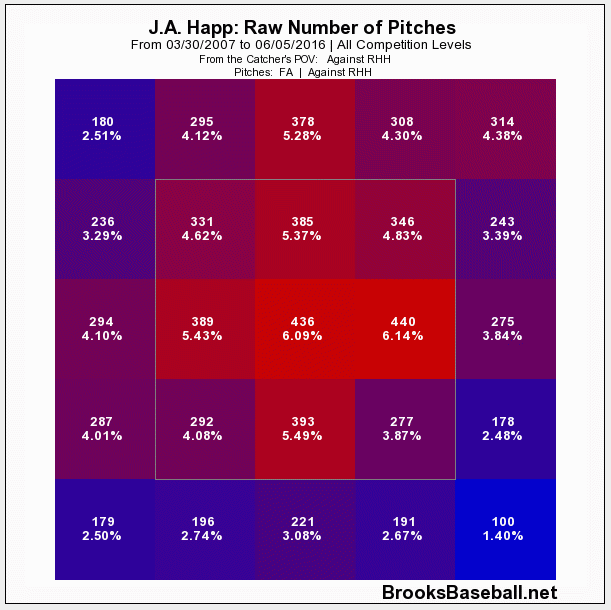 Is this the reason why he has been so successful? It doesn't seem like it, but it might be enough to control the Tigers' righty-heavy lineup in this game.

If Rod Allen were writing this preview, he would tell you all about the Tigers' "contact-to-damage ratio" against J.A. Happ. The veteran lefthander has made four starts against the Tigers in his career with a 3.71 ERA, but the current roster has done a fair amount of damage individually. In their 90 combined plate appearances, Tigers players have 19 hits, 10 of which have gone for extra bases. They have also drawn 13 walks to 12* strikeouts, resulting in an impressive .360 on-base percentage and .833 OPS.

*Anibal Sanchez is responsible for five of those strikeouts, but he does have a triple off Happ.

It has to end somewhere, doesn't it? Michael Fulmer's dominant run in his last three starts has lowered his ERA by three full runs and erased all doubt about starting his major league service clock, but he has to come back to earth at some point. The Blue Jays offense has perked up a bit recently, and one would expect they can still take a rookie pitcher to task if he's not sharp.

On the other hand, the Blue Jays have struggled to score runs on the road this season, batting just .225/.306/.388 away from the cozy Rogers Centre. They have struggled against power arms as well, managing a meager .669 OPS as a team. Timing may not be working in Happ's favor either, with the Tigers facing their fourth lefthander in as many days.

Editor's Note: New players win cash in their first daily fantasy league or get their entry fee refunded! Offered in SB Nation's partnership with FanDuel, your hub for daily fantasy baseball and more.