Tigers’ Victor Martinez is swinging and missing more often in 2016

The Tigers’ slugger has become more aggressive at the plate, but it is not paying off.

Share All sharing options for: Tigers’ Victor Martinez is swinging and missing more often in 2016

Two months into the season, few Detroit Tigers were finding more success at the plate than Victor Martinez. After a disappointing 2015 that was marked by injury and underachieving, this was the start that both the slugger and the team wanted to see. By the end of May 2016, Martinez owned a .343 batting average and 145 wRC+, putting him among the most productive Tigers and designated hitters around the league. However, this stat line was quick to change.

Since the beginning of June, Martinez has recorded a lowly .232/.283/.426 slash line. Though he has increased his home run total, his 85 wRC+ is much lower than his early-season figure, and his production has not exactly been what a team looks for from their DH or No. 4 hitter. While there are a variety of elements that factor into this downswing, the most notable number is his 20.5 percent strikeout rate. This is a huge jump from his 9.8 percent mark to begin the year and is much higher than his 10.6 percent career average.

The rise in Martinez’s strikeouts stems from two places, with the first being a recent surge in aggressiveness. His 43.8 percent swing rate from April and May has increased to 48.9 percent in June and July, with his swing rates both inside and outside of the strike zone rising at least five percentage points. Martinez’s career swing rate is coincidentally also 43.8 percent, which highlights his deviation from the norm in recent weeks.

Paralleled by his uptick in swings is an unexpected drop in contact rate. With a career average sitting at 88.2 percent, Martinez was hovering right around there to begin the season, connecting on 87.5 percent of his swings. However, this number has dropped to just 82.5 percent since the beginning of June, which becomes a bigger issue when paired with his increased propensity to swing. 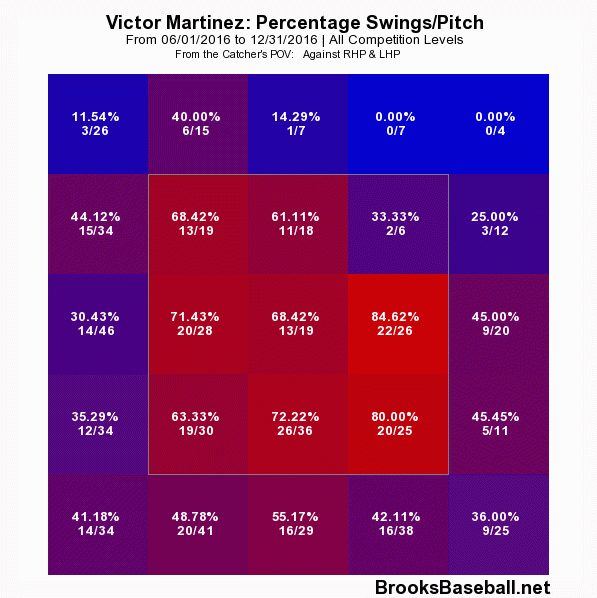 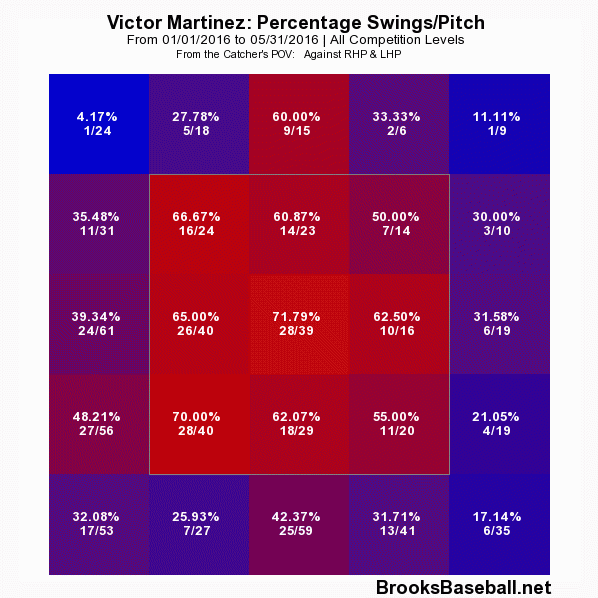 As seen in the graphic above, Martinez has been more aggressive all over, including the lower two-thirds of the strike zone and the area right beneath it. Meanwhile, his whiffs per swing are higher in many parts of the zone as well, particularly down-and-in against both lefties and righties.

While Martinez has swung a little more often at fastballs and a little less often at offspeed pitches since the beginning of the year, he has increased his swing rate from 25.5 percent on breaking pitches to 42.5 percent in June and July. Pitchers have thrown essentially the same mix of pitches to Martinez in the past month and a half that they did to start out the season, but he clearly has taken on a different approach.

Though the pitches may be of similar nature, the results have been far from that. Comparing April and May to June and July. Martinez has increased his whiffs per swing on all three pitch types -- hard, breaking, and offspeed -- and has understandably seen his batting average fall in all three areas as well.

Fixing his contact should be Martinez’s first priority, but the issues do not end there. With his decrease in average over the past few months is a steep drop in BABIP, going from .346 to .252. While some of this may be due to defensive positioning, his line drives have turned into ground balls and his hard contact percentage has taken a dive. While he has seen the home runs continue, Martinez is not getting on base nearly as often as he needs to, and it is easy to see why.

Players go through many ups and downs throughout the course of the season, and there is plenty of time for Martinez to make adjustments. His 117 wRC+ over the totally of the season is good for eighth among designated hitters and is a much better figure than the one hit ended with in 2015. Still, his aggressiveness at the plate will be something to keep an eye on going forward. If the contact issues continue to persist, Martinez will need to reconsider his free-swinging approach at the plate.