I've been a Tigers fan since birth, but I moved away from Michigan shortly after graduating college. I've spent the majority of my adult life living in Baltimore City. For one series each year, I get to see my team play in my town. If you are traveling to Baltimore to see the Tigers play, let me first say Welcome!

Much like Detroit, Baltimore definitely gets a bad rap. We aren't without our flaws, but we're certainly a lot more than The Wire would make you think. There's plenty to do in town around the ballpark and more to do if you decide to make it a weekend trip.

Camden Yards is arguably one of the most iconic stadiums in the league. Just like any other ballpark, you'll definitely want to walk around the park a bit once inside. But, you can take things to the next level by taking a 1-hour tour well before game time. Tours should be available that Friday and Saturday at 10 a.m., 11 a.m., 12 p.m. and 1 p.m for a bank-busting $9 per person. Like baseball? Take the tour. Seriously, it's worth it.

If you like to splurge a bit and sit in the infield, know that the visitor's dugout is on the 3rd base side. Tickets near that dugout aren't super cheap, but sitting there is well worthwhile. Having said that, I tend to prefer the 1st base side for the commanding view of downtown. This shot is from just to the other side of home plate, but you get the idea. 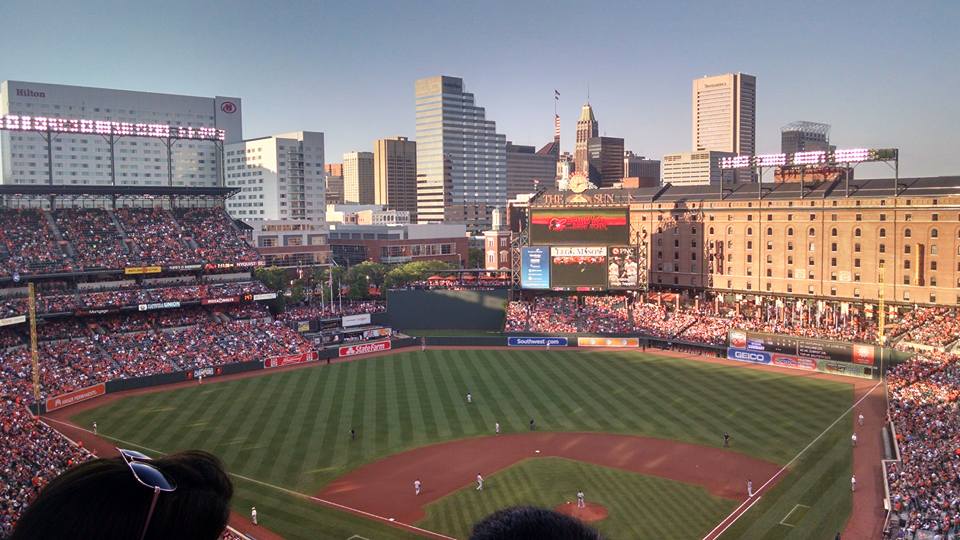 If you want to upgrade your experience a bit another way, also check out the club level. These sections are between the lower and upper deck, so the view is reasonably good. The real upgrade is on the lounge-like concourse. Things are a bit more refined and sophisticated than the typical concrete concession areas where the riffraff get their beers. There's a ton of fun stuff to walk around there and see. This trophy case in-line with home plate really caught my eye. 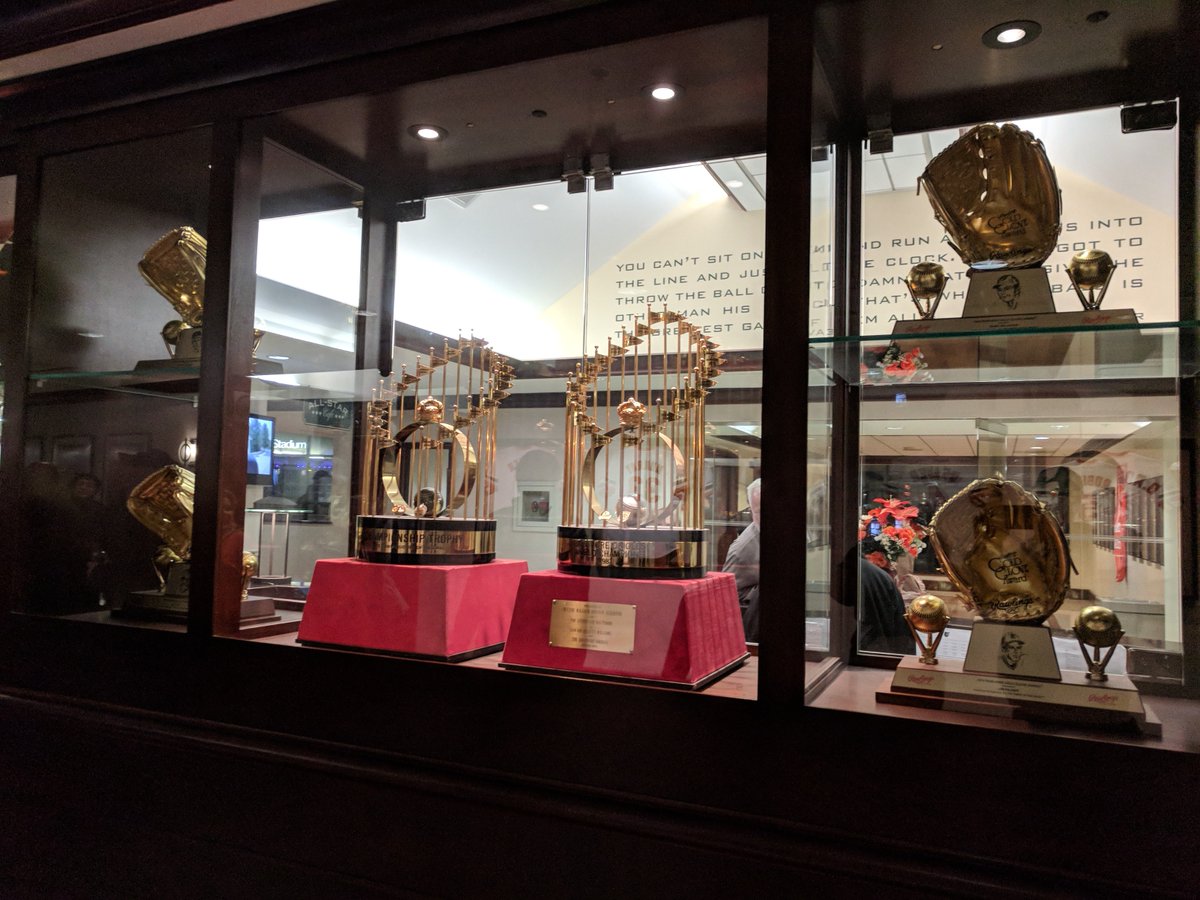 I'll be honest here, I've never driven to Camden Yards. All of my trips have been either walking and Uber. Baltimore's Light Rail does have a station that is right next to the stadium and works quite well from the northern and southern suburbs. The southern path splits into two extensions with one going directly to BWI Airport. Many of those stations have ample parking for this very purpose. If you do take that route, be advised that leaving the stadium right as the game ends will be an absolute madhouse. Those trains fill quickly.

Camden Yards is right in the middle of downtown Baltimore, so there are plenty of places to grab a pregame meal or drink. In a minute, I'll talk about other places to go and things to do while you are here. If you're looking to explore a bit earlier in the day, that will give you some options. But, right before the game, the place to be is at the bars just outside the stadium along Washington Blvd. Pickles Pub and Sliders Bar and Grille are the headliners with large roped off areas with plenty of beer on tap in full view of the stadium entrance. Frank and Nic's West End Grille is right next door and provides a more relaxed, sit-down meal. My favorite is actually Pratt Street Ale House, but that's a couple of blocks from the real game day energy.

There are multiple entrances to the stadium but things just aren't right in the world unless you use the entrance at the North end of the stadium right on Eutaw Street. (Feel like a local and know that it's pronounced just like the state -- Utah.) There are statues to Oriole greats just outside the entrance and the walk into the stadium is worth going a little out of your way.

Once you get in, walk down Eutaw Street. Just as you enter, make note of the stairs up to the Roof Deck Bar on your right. It's a great place to socialize a bit during the game with a view of the game from the center field. Now that I've pointed that out, continue down Eutaw Street. I don't care where your seats are, just do it. You can double back if you need to.

The stadium will be on your right and the historic warehouse will be on your left. And yes, it is historic -- built in 1899. It was used to store goods that arrived via the Baltimore and Ohio Railroad station on the site. Today, goods are housed in single-floor warehouses in the suburbs, but this is still a rail station. Instead daily commuters use the local light rail and regional rail lines daily at Camden Station . Here's a pic of the warehouse from 1905: 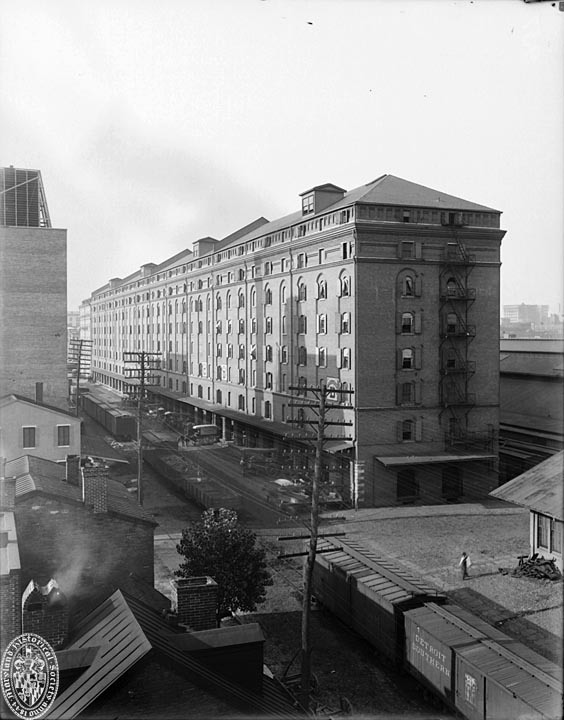 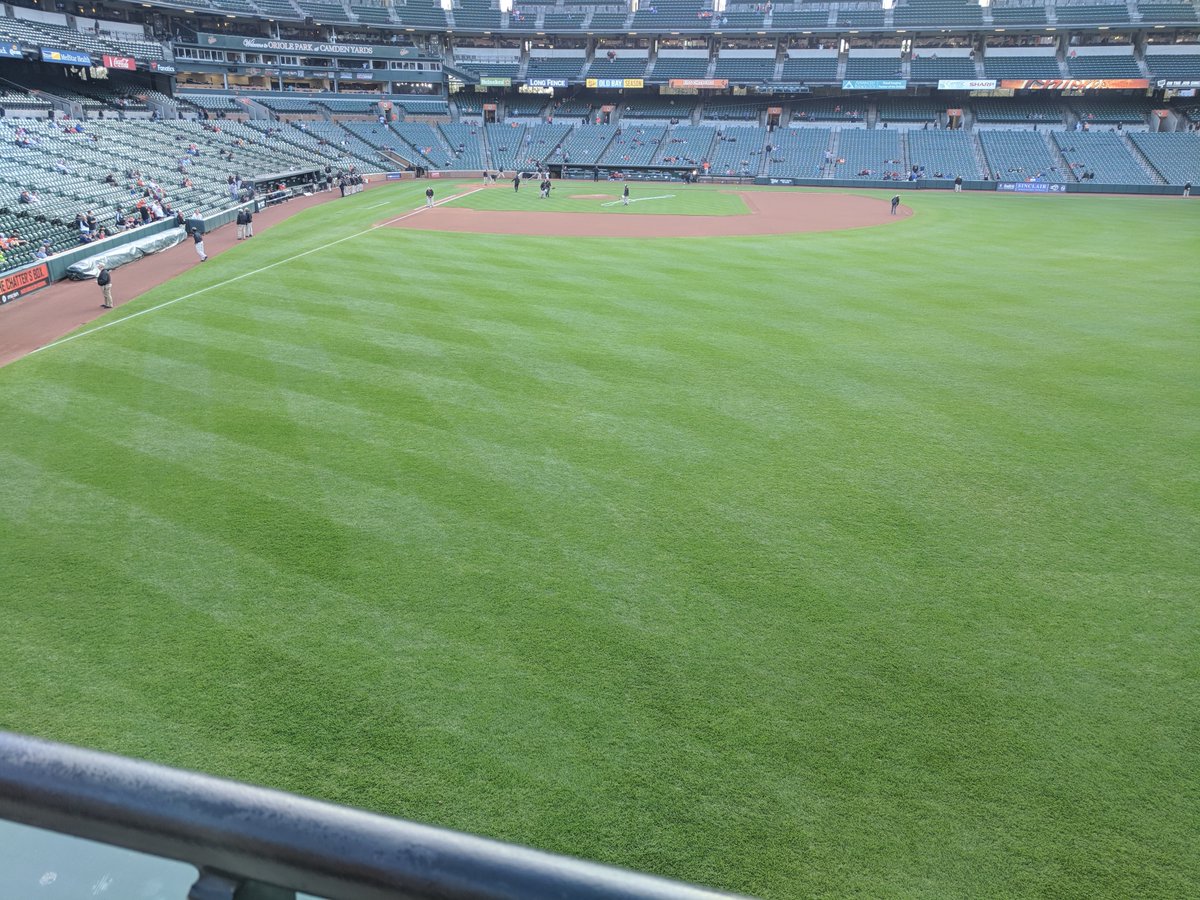 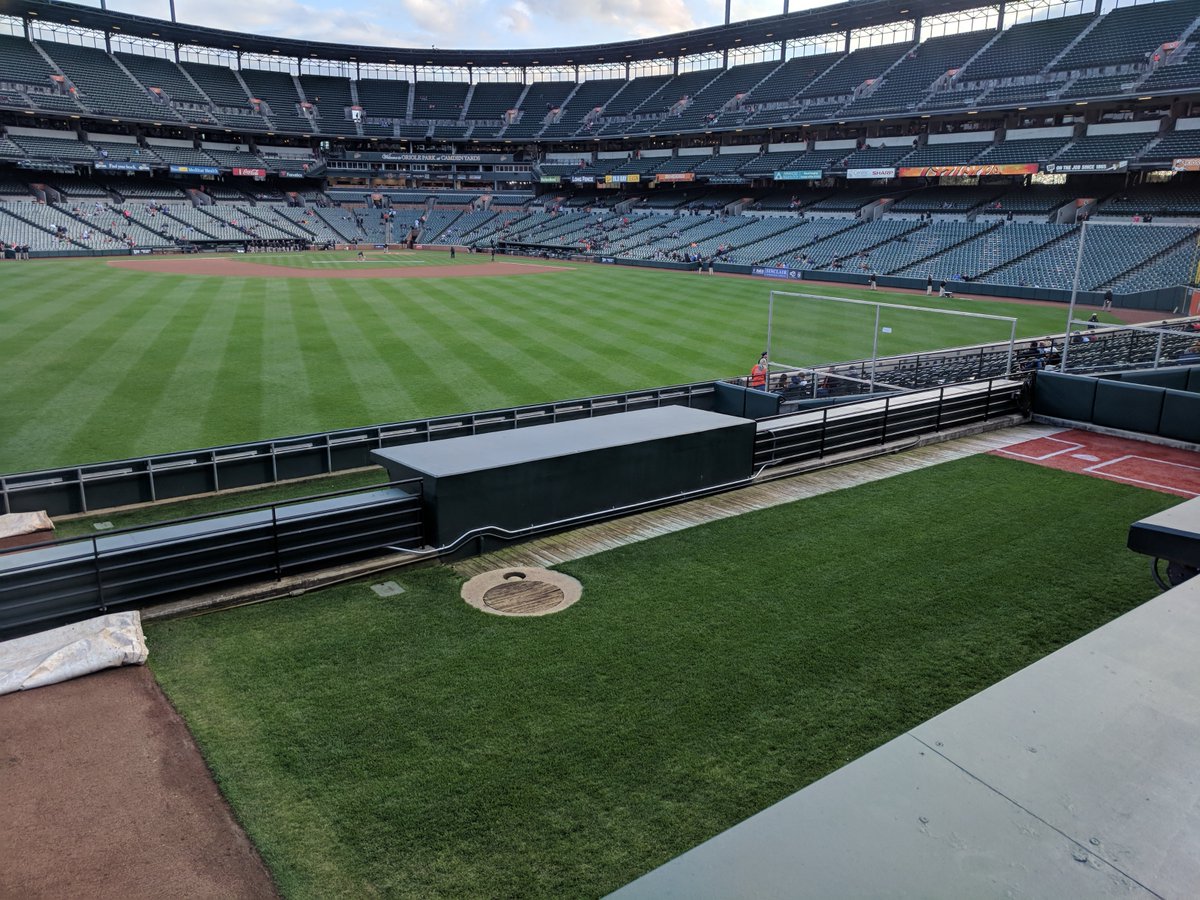 Vendors will be... everywhere. The main team store will be on your left and concessions will be all over the place. I'd encourage you to grab a local beer along the way. Heavy Seas and Flying Dog Brewery are the big ones. Other Maryland brands available include Union, Jailbreak, Monument City, Oliver Brewing Co., Key Brewing Co. and Manor Hill Brewing. All of them are quite worthy. (Baltimore does like to claim National Bohemian - a.k.a. 'Natty Boh' - even though it isn't event brewed here any more. I'd skip it unless you want the local equivalent to Bud Light.)

Once you can see the playing field, don't forget to look down a bit, too. Whenever someone hits a home run onto that concourse, whether they are O's batters or not, a plaque is installed to commemorate it. Two Tigers have done it: Mickey Tettleton hit one in 1992 and Victor Martinez hit one not too long ago. Both hitters curled home run shots just inside the foul pole. The two plaques can be found with a cluster of other plaques as you pass the foul pole. (There's a full list here if you want to find other hitters who have hit Eutaw Street.) 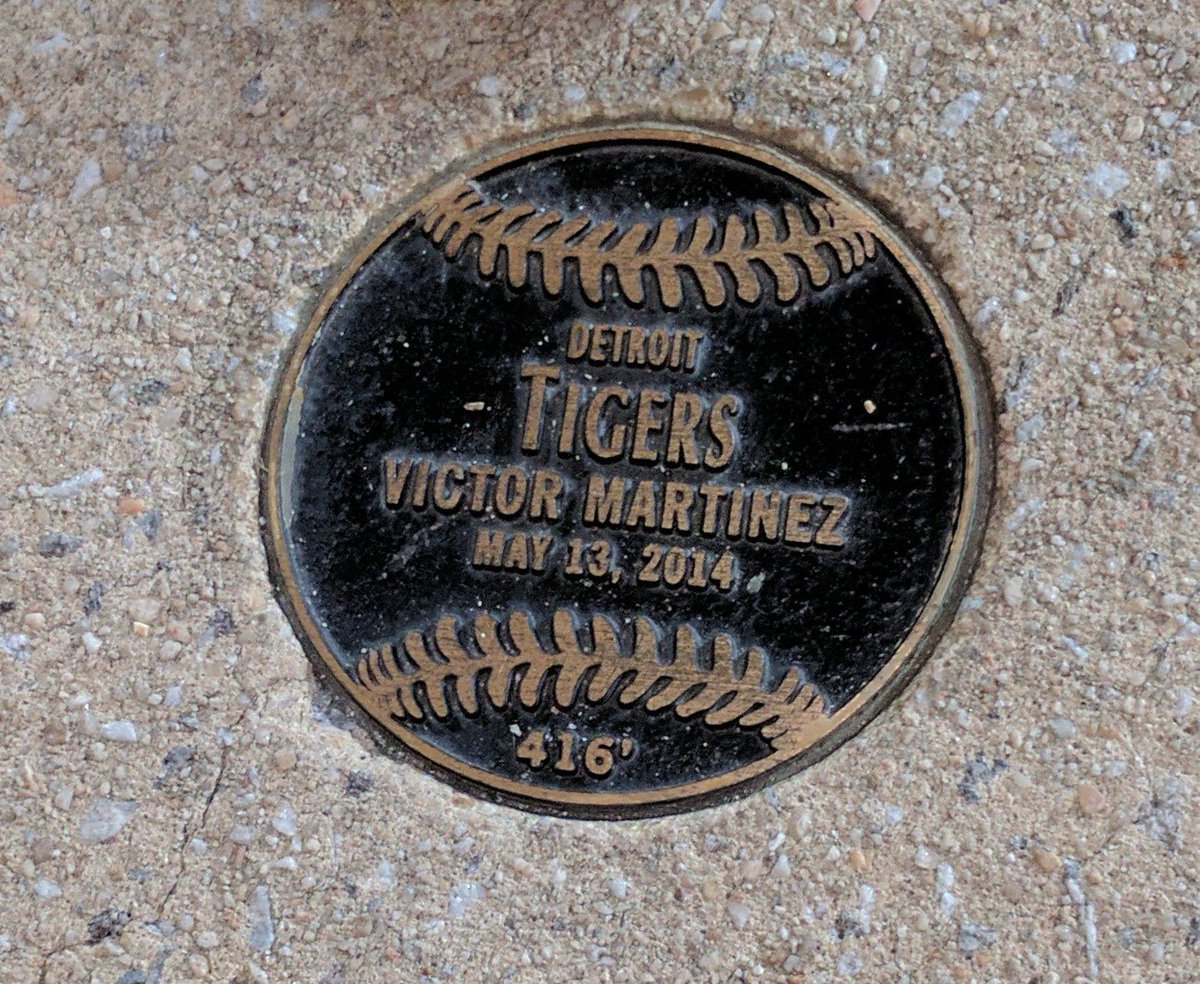 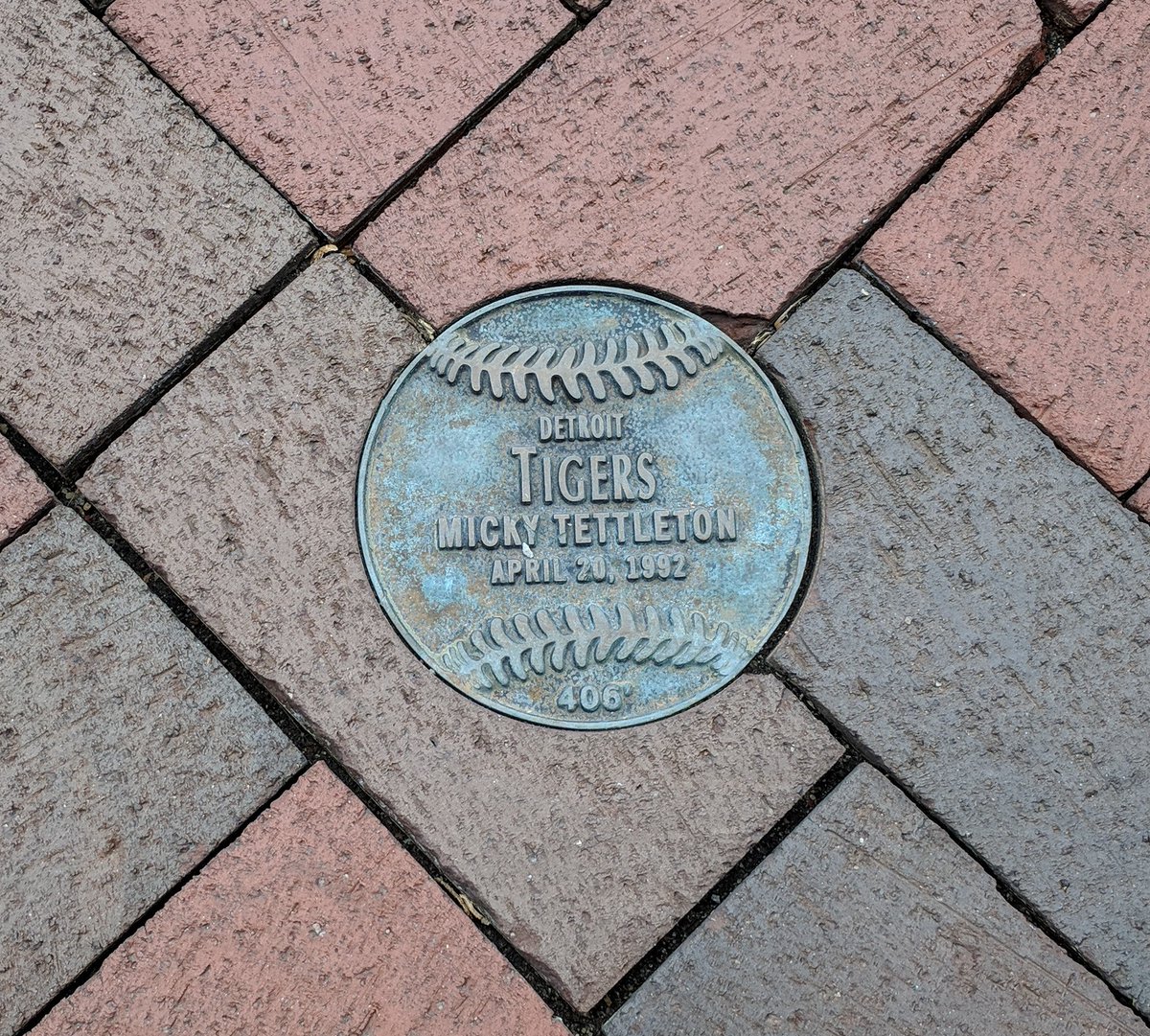 Now that we've covered the stadium itself, hopefully you'll be willing to do just a little exploring around town.

The vast majority of Baltimore's tourism energy is focused on the Inner Harbor. If nothing else, it would be a little silly to travel to Baltimore and not at least walk around the Inner Harbor a bit. Other than restaurants and souvenir shops, here are some of the attractions there: 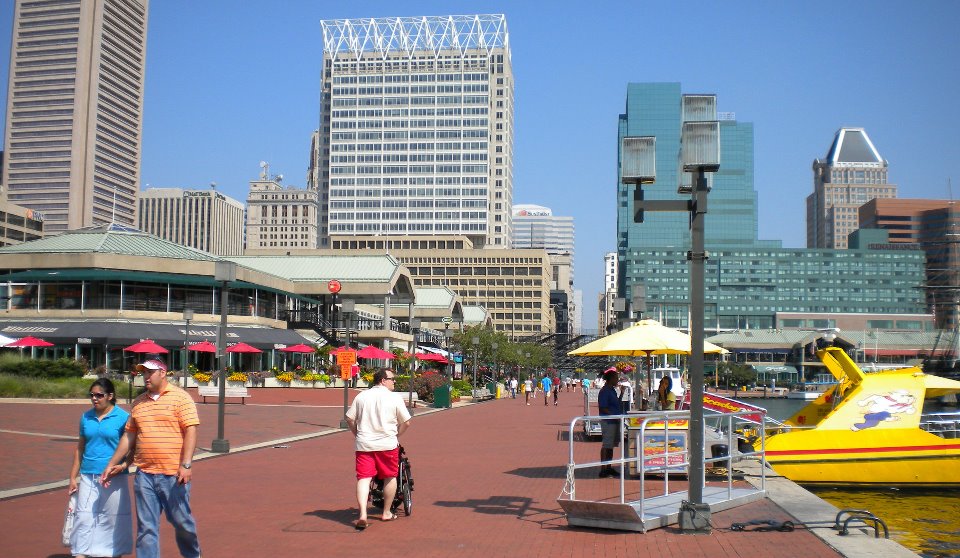 If you're up for taking some stairs, definitely take a little walk up to the Federal Hill Park. The park offers a commanding view of the Inner Harbor, the city's skyline, and well out to sea. Early in the 19th Century, this vantage point was used to observe incoming merchant ships and then signal the port to prepare for their arrival. The site has a few cannon that point back at the city. That might seem a little odd, but similar cannon were installed there during the Civil War to keep Southern sympathizers in line. 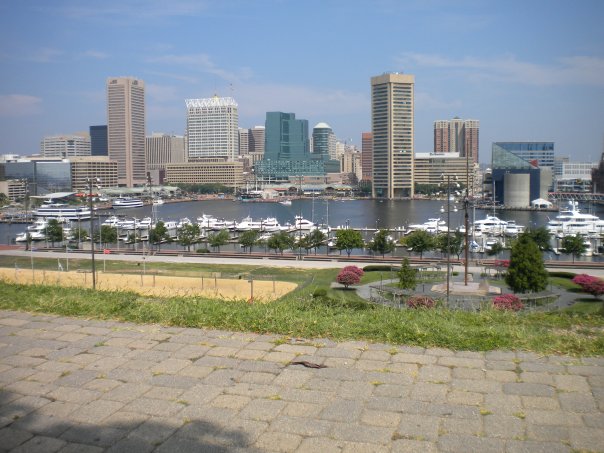 If you're up for more, we're happy to have you.

I should mention at this point that Baltimore's social scene doesn't really revolve around downtown at all, other than the Inner Harbor. If you were to just start walking, you might think there really isn't much more going on. The truth is most of our can't-miss spots are a bit farther away. Some of these areas are well within walking distance, but you shouldn't just assume that you'll find cool spots just by wandering unless you do it along the water. If you aren't up for walking, plenty can be reached using the Water Taxi.

There's a lot more going on, but I'd say I gave you a lot to start with. If you really want more, I'd refer you to The Google. If you do decide to visit us, I hope you enjoy your time here!