During his brief tenure with the Chicago Cubs, former Tiger Alex Avila was worth 0.6 wins above replacement according to Fangraphs. Reliever Justin Wilson has accumulated about 0.7 fWAR since he was traded along with Avila to the Cubs at the 2017 trade deadline. In exchange the Tigers received the clearly superior package of Isaac Paredes and Jeimer Candelario, the former of whom has since reached Double-A at the age of 19 and is on his way to becoming a top-100 prospect. But as suggested by the title, this article is about Candelario, who in 162 games with the Tigers has been worth 3 wins and is under team control through the 2023 season.

Despite (or perhaps because of) his early success with the Tigers, Candelario's 2018 season has felt a little disappointing. In 2017, Candelario had a 138 wRC+ and began 2018 just as hot, slashing .272/.359/.497 through May 12th, good for a 134 wRC+. But on May 14th he was placed on the disabled list with wrist tendinitis, and since his return on May 25th, Candelario has hit just .210/.299/.370, equivalent to a decidedly below average 83 wRC+. Whenever a player seems to stop hitting following a wrist injury, the decline is usually blamed on the lingering effects of said injury, and Candelario may have been dealing with pain after he came off the DL. But Candelario's contact quality has been so bad since his DL stint that further investigation is warranted.

Candelario has not been putting the same charge into the ball since his injury. According to Fangraphs, 15.6% of his batted balls were hit softly before May 25th, better than the league average 18%. Since then, 22.6% of his balls in play have been of the soft variety, predictably hurting Candelario's production. Candelario's fly ball rate has risen since his injury, which may seem like a good thing; however, these fly balls have not been hit well. 15.2% of his fly balls have been infield flies, much worse than the league average of 10.4%. Per Baseball Savant, Candelario barreled 8.9% of his batted balls in April and 12.5% in May, but since then his monthly rates have varied between 3.6% and 5.3%, all below the 5.8% league average. Simply put, Candelario has been getting under too many pitches and hasn't been squaring them up, which is a large part of why his average and slugging percentage have cratered.

Candelario has also developed a swing and miss problem that has caused his strikeout percentage to rise from 22.8% pre-injury to 27.7% post-injury. Take a look at his monthly swing and miss rates on all pitches: 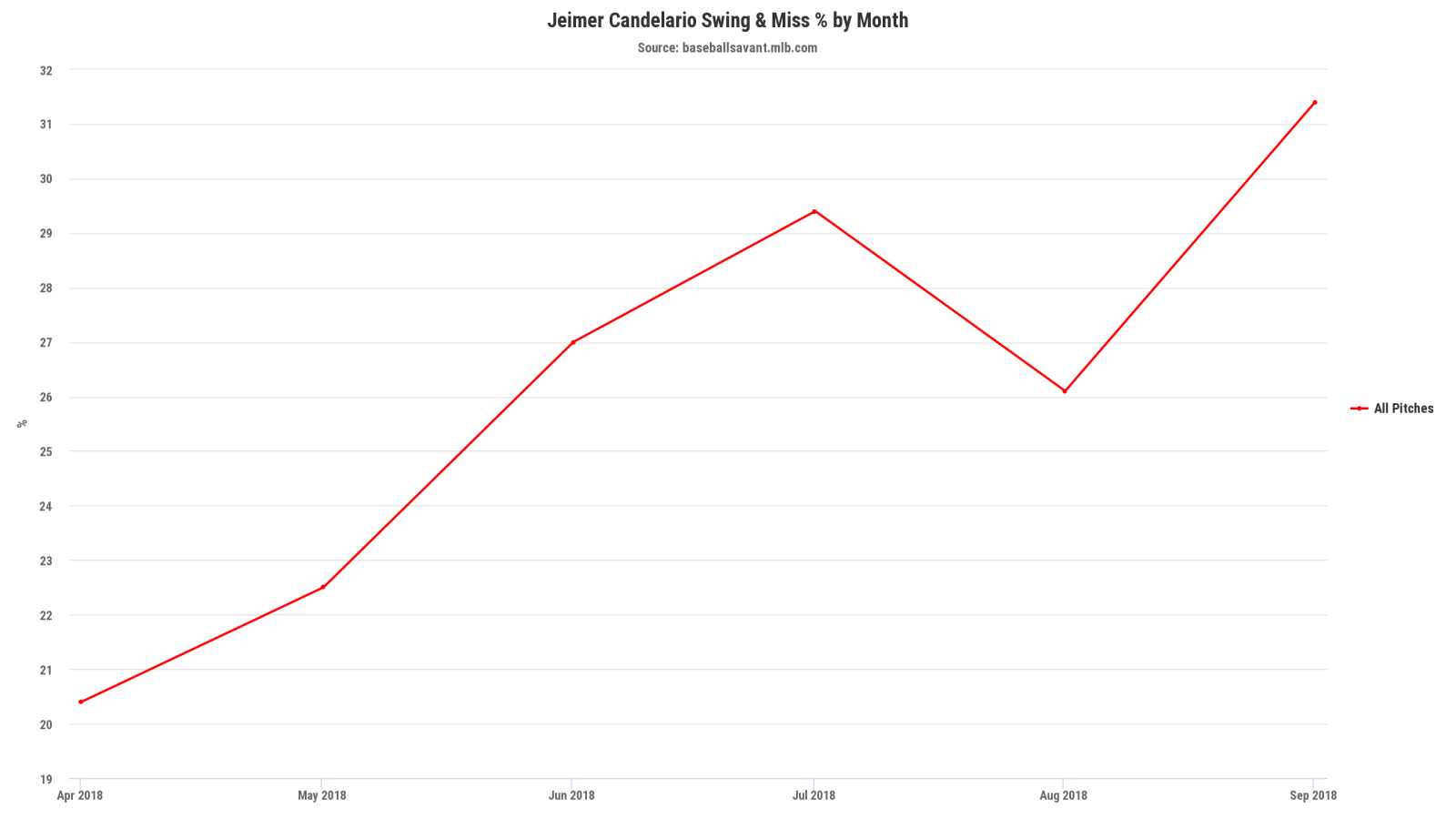 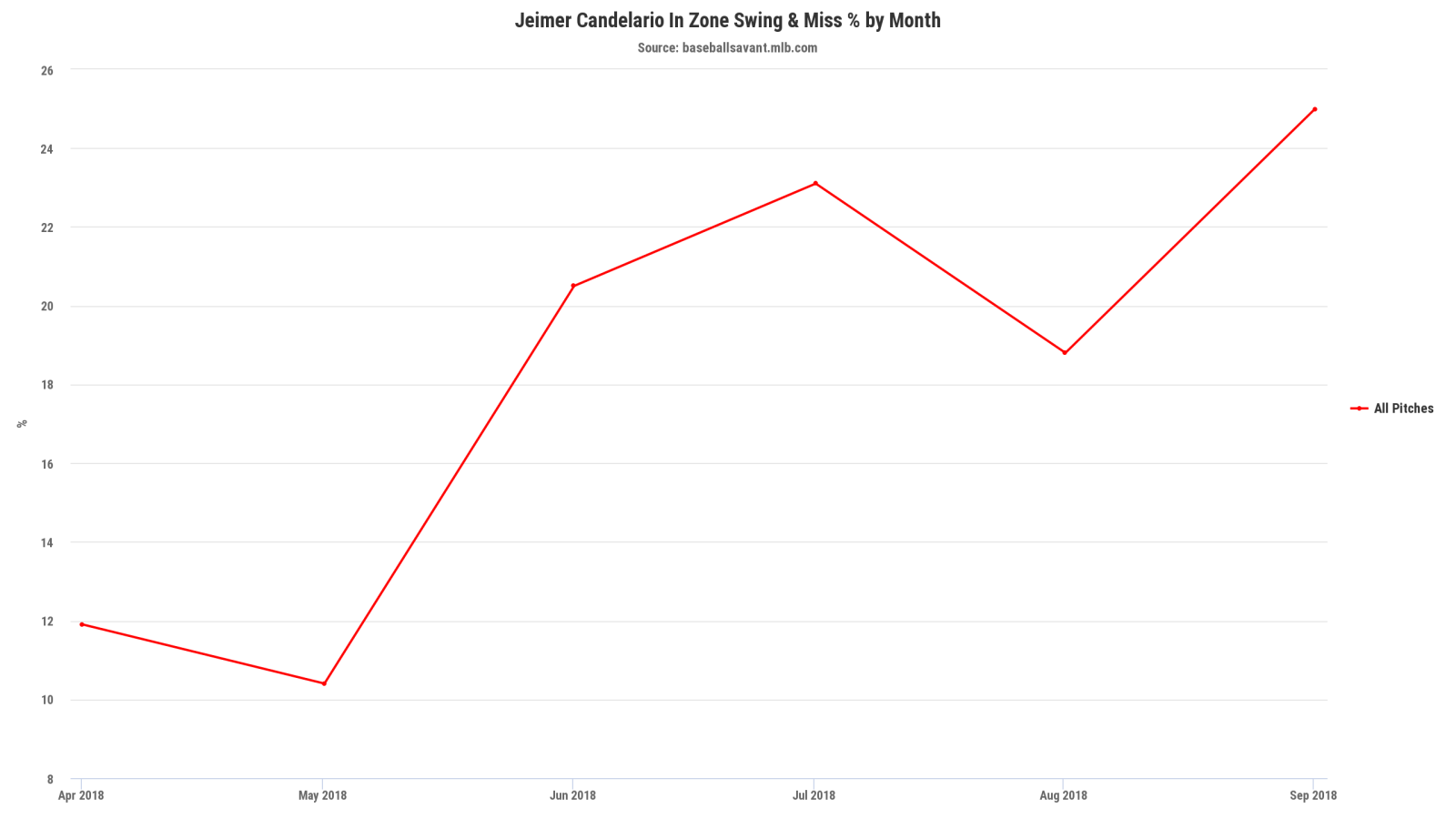 Candelario has a big problem at the plate right now. When he's hit the ball, the results haven't been as good as earlier this season, which is made worse because he's hitting the ball less often. There isn't much to indicate that he's been getting pitched to differently since coming off the DL, which suggests that he may still have a problem with his wrist. It's not uncommon for batters who come back from wrist injuries to struggle for the rest of the season, and maybe Candelario will come back next season at full health and hit like he did at the start of 2018. It would probably be good news to hear that the wrist is still bothering him, because there isn't much to like in Candelario's performance since getting hurt. While his wOBA and slugging percentage have been above average in September, his expected stats are still ugly. His highest monthly xwOBA since May was .297 in August, and his best xSLG% was .368 in the same month, which happens to be the month he had a slight improvement in his whiff rate.

It isn't clear if Candelario will play again this season, as he's been out of the lineup recently with back spasms. If his 2018 season is over, he'll finish with a 97 wRC+ and 2.3 fWAR. Candelario is an above average player so long as he can play passable defense at third and put up an average batting line, and I'd bet that he can do that going forward. But 2018 went south pretty fast for Candelario, and his offensive struggles are cause for some concern. If his problems aren't just injury symptoms and go unsolved, then he isn't a lock to be the everyday player we thought he'd be.