Let's take a look at the roster as it stands now. Believe it or not, the Tigers could actually field a full 26-man team without signing a single free agent. But, I'll warn you now, this isn't pretty. 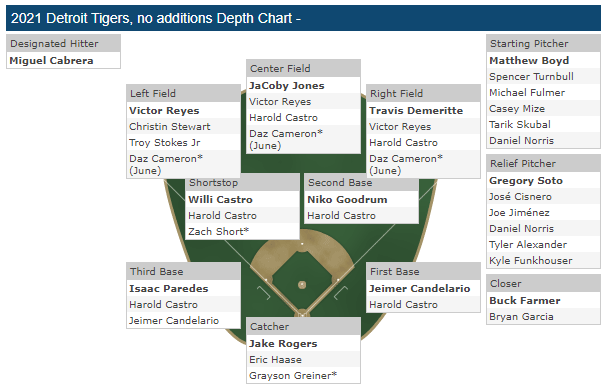 (Side note #1, I'm using Operation Sports to make these depth charts. The tool has worked pretty well for this purpose and has the ability to create html that can be inserted online.)

(Side note #2, I'm deferring to the Tigers depth chart in some places. Swapping Boyd and Turnbull is a valid debate, as is swapping Goodrum and Castro in the infield.)

Ok, obviously, this team has some holes to fill. That's painfully obvious. No one is suggesting moving forward with this depth chart. (Queue the long list of replies from people calling me crazy for suggesting they not sign anyone. Please don't be that guy.) Here are where I see holes:

So, how to fill these holes.

In looking at this list, I relied on this Top 50 MLB Free Agents post from MLB Trade Rumors. If you haven't done it yet, download their mobile app and configure it to notify you whenever there's Tigers breaking news.

I know it's fun to imagine this team breaking out of the rebuild by signing a whole slew of the top free agents, Pudge Rodriguez-style. Everything that we've heard so far is that the Tigers won't be swimming in these waters just yet, so my offseason plan isn't going to go there. But, just for fun:

Coming back down to earth, here's how I'd progress.

I'm looking to address the middle infield issue with a player who belongs on the field on a daily basis but can cover either 2B or SS. AJ Hinch would be able to mix in Goodrum, Willi Castro, Paredes where they fit best around him. Free agent targets:

Obviously, it would be great to swing for the fences and sign JT Realmuto. I don't think he's ready to be the 2021 version of Pudge, though. He wants to spend his prime years with a team that's already championship material. Free agent targets:

If Realmuto, McCann, and Molina are out of reach (each for very different reasons), I'd probably allocate $5M for Romine and maybe $2-4M for anyone else on the list. At such a low rate, I wouldn't have any problems committing to a second year.

If anything the Tigers outfield is fairly heavy with right-handed hitters, so I might pick a left-handed hitter if given the choice. Having said that, it's more important to find the best player at the price the team wants to pay. Free agent targets:

While Ozuna would make this conversation moot, I'd be happy with anyone on the list. The Tigers should have a decent option in front of them for their corner outfield need.

When I sat down to write this list, I went searching for the 1B/OF profile that we used to see across the league. Trey Mancini here in Baltimore is the perfect mold. If Hinch can move the every day first baseman out to the outfield occasionally, he could then move Candelario to first base for that day and open up some at bats elsewhere in the infield for another player. Last season's injury to Cron pushed Gardenhire into that situation on an everyday basis and it ended up getting plenty of at-bats for Isaac Paredes and a few others. It's a bit awkward at times, but there's value in having that flexibility.

If there's a guy on the outfield list who is serious about adding first base to his resume, I'm all ears. Tigers fans certainly went through that debate with Nick Castellanos. Maybe Schwarber would be interested. Whoever it is, he'd be forced to man first base all but once or twice a week. He better be ready to settle in there.

So, I'm not going to put a lot of energy into running down a full list of serviceable free agents. There are many. The guy the team chooses will be unexciting but serviceable... and that's just fine. The starting pitchers that jump out at me are Kirby Yates, Jon Lester, Rick Porcello (all MLBTR 1 year / $5M), and Chris Archer (MLBTR 1 year / $4M). The relief market is even more broad. Just for fun, there are plenty of names but old friends Shane Greene and Joakim Soria are still out there.

Time to take some wild guesses at actions I might take between now and Spring Training... 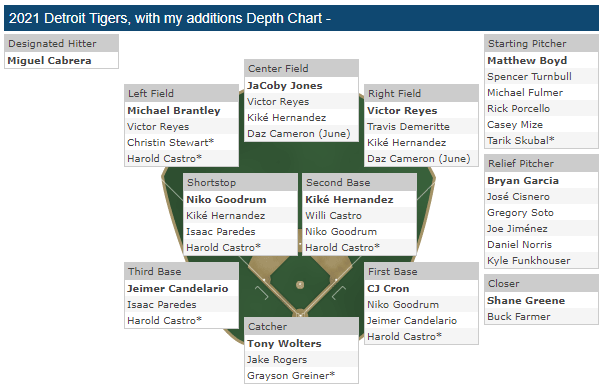 2021 Tigers with my additions

Okay, so there you have it... Just in time to see who the Tigers sign first.

Update 12/18: I still think that the fanbase is over-analyzing Al Avila's comments that now still isn't the time to open the checkbook. We all should have known that players like Marcell Ozuna might be out of reach, unfortunately. But I'm still not convinced his comments rule out Brantley or maybe more likely Joc Pederson. But, fine, here's an alternative reality with a similar approach without Brantley. While I'm at it, I'm going to assume that there isn't a full-time first baseman available and the Tigers have to go with a timeshare approach. 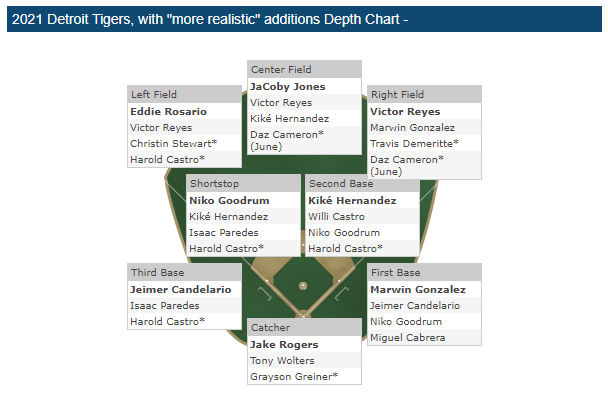