This season has been miserable. Nothing has gone right at all. Our owner and GM have called the rebuild over, yet we’ve been toiling with the worst offense in baseball for a while now. The only thing that has sometimes seemingly managed to keep us in games has been our pitching, and even that isn’t enough most of the time. That led me to a question: How good would our pitching have to be to make the playoffs with this offense?

Before I start explaining the methodology I used to answer this question I’d like to add a few disclaimers. A lot of the things I do here work off various assumptions such as our offense staying this poor throughout the entire season and Fangraphs standings projector being 100% accurate so anyone reading this should take this as just a fun(?) thought experiment rather than anything meaningful. With that being said: according to Fangraphs the only AL Central team projected to make the playoffs is the Twins with an 85-77 record winning them the division. All we’d have to do then is win 86 games in order to make the playoffs.

The way I’m going to calculate the maximum number of runs we could allow in order to make the playoffs with this offense is something called pythagorean W%. Pythagorean W% is calculated using two numbers: runs allowed and runs scored (to read more about how this is calculated and the justification read this: Pythagorean Theorem of Baseball - BR Bullpen). This formula gives you a number that you can then multiply by 162 to get a relatively accurate estimate of how many games a team should have won in 162 games. Pythagorean W% is most typically used to figure out how "lucky/unlucky" a team has been throughout the season, but in this case we’re gonna use it a little bit differently. I’ll spare you the details (if you really want me to explain it in depth please comment I don’t want to clutter the fanpost with the math).As of writing this the Tigers have scored a pathetic 169 runs this season so far (that is 43 less runs than the next worst Oakland Athletics) and we can use that to estimate the amount of runs we’d be able to allow over a full season to win 85 games. That number is 403 runs. That is not a lot of runs, but to really contextualize it lets convert that to ERA. To do this I’m just going to assume the best case scenario which is no unearned runs and no extra innings so we can simply divide 403 by 162 games and… 2.48. An ERA of 2.48 is the WORST ERA that would carry this team to the playoffs… again this is without ANY extra innings and with ZERO unearned runs! Whoof! Here’s a chart to put that into perspective: 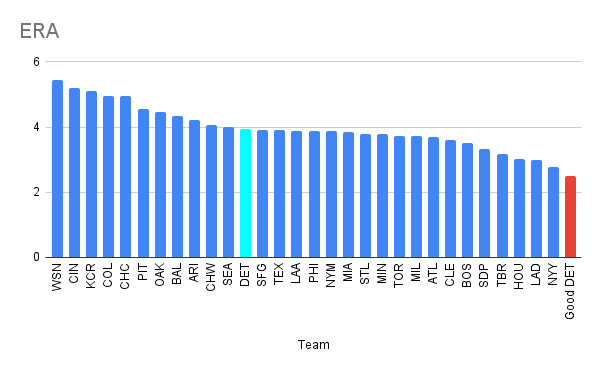 Notice how even the Yankees who happen to have the league's best ERA this season still don’t have a good enough ERA to make this happen? It gets even more gross when you start looking at ERA predictors such as FIP and SIERA given that NO team has a FIP or SIERA below 3! That to me indicates that we would need a historically dominant pitching staff in order to even take a WHIFF of the playoffs!

TLDR: The Tigers suck and apathy is the only non painful way to be a fan of this disastrous team.