To say that the start to Spencer Torkelson’s career has been disappointing would be a massive understatement. He is currently tied for 4th least valuable player by fWAR and is by far and away the worst rookie in baseball so far. He is on track to easily "Mathis" (200 PA with an OPS+that is less than or equal to 60) and that has led many narratives to emerge about the young first baseman. The most prevalent of these has been his inability to take advantage of pitches right down the middle. You can find many compilations of him fouling off these pitches, weakly grounding out or even straight up misses. How could a rookie first who’s only real upside is his bat be incapable of crushing pitches like that? At first a baseline look at the basic statistics of Tork against pitches in gameday zone 5 don’t give us any kind of argument against this narrative. (this: 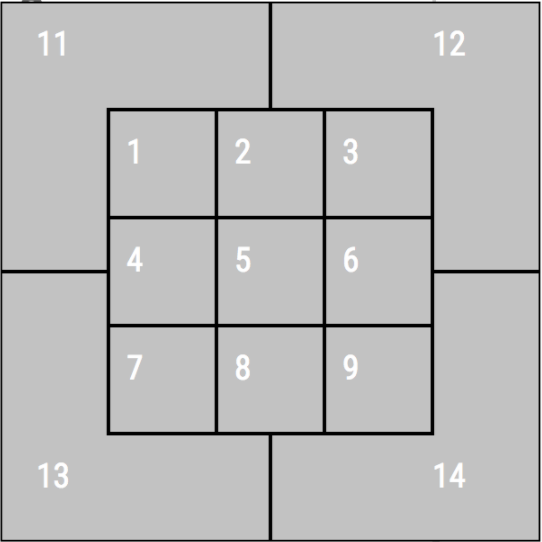 His batting average on these pitches is exactly .100! That is not something you would ever want to see out of somebody who’s supposed to succeed a hall of famer such as Miguel Cabrera. Even once we do get into more sabermetric friendly stats such as OBP and wOBA he still manages to be well below average (0.091 OBP and a wOBA of 0.081)! 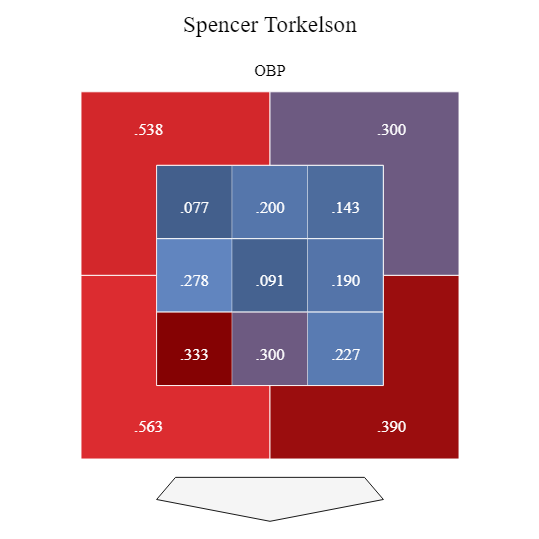 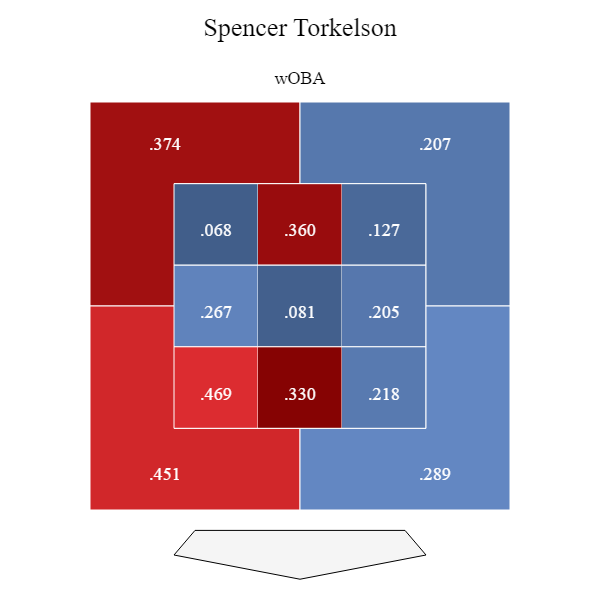 When you look at just these numbers it’s hard to make a case for Tork being anything other than a complete bust. However look just below the surface level stats, and you will find a reason to hope. To believe in this team and Tork!

You don’t need sabermetrics to tell you that Tork has been awful at the plate this season. Heck! You don’t need any numbers to tell you that much! However, predicting how he will soon do is another matter entirely. Statcast is home to xwOBA. A stat that uses batted ball data to try and predict a player’s performance in the future based on what most likely would’ve happened on every PA. Peripherals like these are very important to use when evaluating things with a small sample size. You may say that Tork has had 244 PAs this season which is a large enough sample size to draw conclusions for but, if we narrow that down to just pitches in the middle of the plate he’s only faced 82 such pitches, which when it comes down to it, is a very small sample size leaving plenty of room for luck to muddy our data. wOBA-xwOBA is the most direct way you can measure this. Literally calculating the difference between your wOBA and your xwOBA. A positive wOBA-xwOBA generally means you’re getting lucky whereas a negative one generally suggests you're getting unlucky. Let’s take a look at the 5 unluckiest players in terms of wOBA-xwOBA on middle middle pitches.

Right there sitting at the number 4 spot… our unlucky boy, in typical Tigers fashion, is one of the unluckiest players in the MLB in this regard! Thanks to a hilariously unlucky .100 BABIP on these pitches and likely some herculean defensive efforts by his opposition. Tork’s performance on these pitches has been nothing short of unfortunate. A series of 82 very unfortunate events.

Coming into June and throughout it the narrative was that this team’s offense was historically terrible and that they were going to lose over 100 games. Now granted, the offense was actually that terrible results wise but if you looked at the peripherals, there was plenty of overdue regression towards the mean due! Now with Riley Greene coming in this team has finally started to click offensively and has started to score runs at a respectable rate! These last two weeks have been very fun to watch as a Tigers fan and that was after coming off a miserable homestand where we were outscored by about FORTY RUNS! I understand that watching Tork play baseball right now is painful. I get that. Just understand that his performance is unsustainable, and that he is going to be a very fun player to watch very, very soon.