Thanks to the postponement of today’s game the first half of the 2022 season for the Detroit Tigers has unceremoniously come to an end. With that being said I will be grading the players off what my expectations of them are rather than comparing them to the league. (1/10 means that they severely underperformed expectations 5/10 means that they are exactly where I think they should be and 10/10 means that they have overachieved massively in a good way)


Note: I will talk about players in the order of highest to lowest Fangraphs WAR.

Schoop had a decent season last year with the bat and an excellent one with the glove. The way he followed that up though this season so far has been… pathetic. Slashing .212/.246/.315 for a 56 wRC+ just isn’t acceptable at the major league level for the most part… that leads me to the only "saving grace" if you will about Schoop this season… his glove. He leads all of MLB in OAA which is the most accurate defensive metric out there. His glove has been excellent and that is the sole reason that he is above replacement level and somehow by fWAR this team’s most valuable position player. As for what should happen to him? He’s on a two year deal so keeping him wouldn’t be the worst thing in the world considering his defense and if he can start hitting better he could actually be a great everyday player considering his glove.

The biggest need during the offseason was to get a SS. The Tigers tried to go after Correa but eventually settled on Javier Baez "El Mago". To be fair to Javi defensively he has lived up to his nickname and pedigree. 85th percentile in OAA is nothing to scoff at and despite somewhat inconsistent aim with his arm he has made some beautiful web gems. That’s about where the positives end with him though. Javi has been unwatchable for most of this season when he’s batting. 3rd percentile in Whiff% and the WORST chase rate in the MLB by a decent margin. Our fears of his lack of discipline have been confirmed in the worst way possible with him seemingly swinging at EVERY SINGLE FREAKING PITCH. That’s Javi for you is what most people would say, but he usually compensates by having a series where he destroys EVERYTHING and let’s just say aside from a series against Arizona, he hasn’t really had any hot streaks like that. We’re stuck with him though for 6 years most likely so… Here's hoping for some improvement.

The local boy Eric Haase has never been a good defensive catcher. His framing this season has been terrible and while he has an okay pop time his throws aren’t particularly accurate and his strategy when calling games leaves something to be desired. However, he’s (somehow) been one of our best players I would argue. Haase is an above average hitter by wRC+ (106) and has been extremely effective against LHP (131 wRC+).

Riley Greene has been better than advertised. The currently #1 prospect in baseball has been doing pretty well for himself with the bat. A wRC+ of 107 isn’t particularly impressive in a vacuum but considering he’s a rookie he’s been fine. He hasn’t hit for much power but he’s been able to get on base and work the pitchers for a while which is something that is pretty much completely absent from most other players the Tigers have. Defensively he’s not supposed to be a titan but he’s held down the fort at CF pretty well and even created a few web gems but we’ll have to give him a bit longer in the MLB to properly evaluate that.

Harold has done Harold Castro things. He’s been slightly above average with the bat (105 wRC+) and a terrible fielder as he’s been expected to be. He led our team in home runs for a hot second which says more about the Tigers than it does about Harold but there’s really not a whole lot else I can dwell on with him.

Victor Reyes hasn’t really done anything notable this season. He’s barely played at all and his bat has barely been below average. The only reason I’m writing about him here is because he qualifies with 100 PAs and I think he should probably play more instead of some other names you’ll see later during this list.

There’s already been plenty of discussion about the trade for Austin Meadows and I’ll talk about it later when the front office gets their review, but for what little he played Meadows was fine. He hadn’t been particularly great in Tampa in 2021 and before he got injured. He’s been meh defensively but that’s something that we knew coming into the season. I can’t blame the injuries on him.

Candelario went from having this as his baseball savant page: 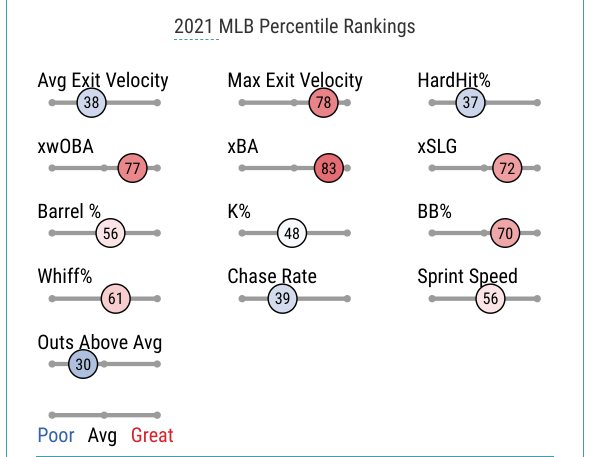 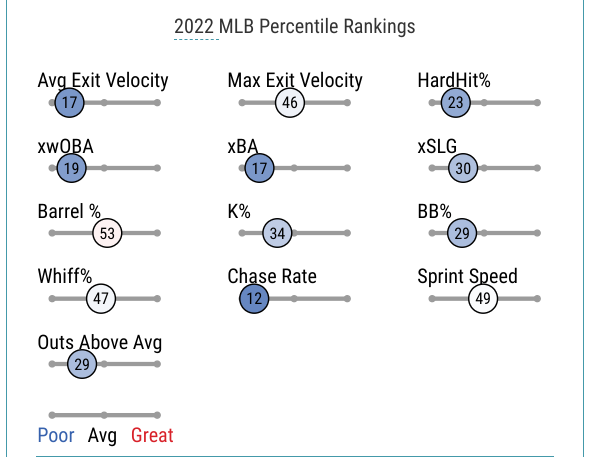 That’s all that needs to be said really. He’s been terrible defensively and offensively and should be DFA’d in my opinion. An incredibly disappointing and confounding performance from Jeimer.

Barnhart has been as advertised for the most part. Good but not great defense and a terrible bat. His bat has likely been hurt by playing in Comerica instead of the hitters paradise that is GABP but other than that he’s been as advertised. I have my gripes with the trade for him but that’s not his fault.

Miggy’s having a vintage Miggy season. Sure he’s below replacement level and his average and bat may not be sustainable but we’re all happy to see him do well anyways. I thought he would be a complete deadweight but he hasn’t been and I’m just happy to see such a legend reach so many milestones.

Grossman is having the same issue as Jeimer where he went from this: 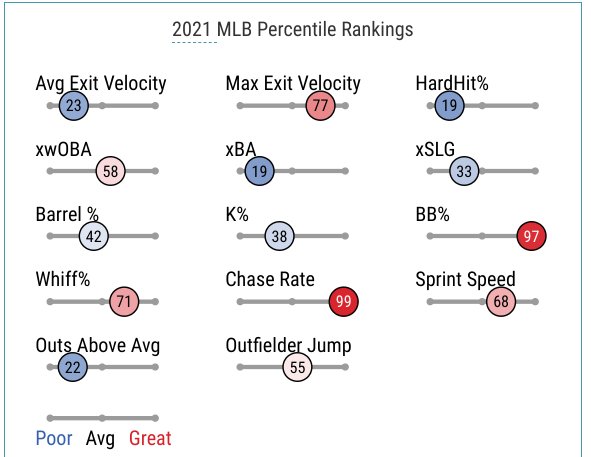 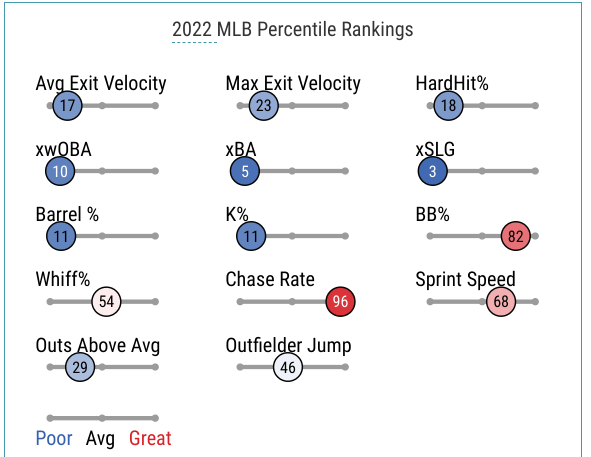 What can I say about Spencer Torkelson that hasn’t already been said? He’s been a disaster. He can’t hit for power and while his approach is great and works pitchers he hasn’t been able to convert that into any sort of production. Even as a self proclaimed Tork apologist I’m still incredibly disappointed by the start to his career and I hope that this trip to Toledo helps him fix his issues.

That does it for position players now it’s time to talk about our pitchers. Starting fittingly with our starters (min 20 IP because if we go by qualified starters we only have ONE)

Skubal had a stretch at the beginning of this season where he was pitching at a Cy Young level. That was never going to sustain and as of recently he has regressed significantly now sporting an ERA of 4.11 but he has absolutely exceeded expectations and been one of the few bright spots this season.

I’ll start with the simple stuff. He started the season off incredibly poorly but was eventually able to fix himself and pitch some okay games later down the stretch. Once he got injured and left the tea, however, that’s where it all gets confusing. E-Rod has been gone for over a month due to a "family emergency" and has been on the restricted list for a while. In this timeframe he has had no contact with the FO or Hinch which is baffling. For his sake I hope he figures his stuff out and pitches for us in the second half.

Faedo was an emergency callup after ⅘ of our starters got injured. Coming off TJ surgery my expectations for him weren’t particularly high. He’s had a couple decent starts and a bunch of absolute duds including one start where he threw 50% balls and 50% strikes but given the circumstances it’s okay I guess.

If you’ve talked to me during a Drew Hutchinson start you know that I hate seeing him pitch. He’s an inning eater. He’s not there to get outs and prevent runs instead he’s just there to pitch regardless of what happens and hopefully save the bullpen some innings. In that regard he’s been fine. Terrible numbers and a bunch of duds but what are you going to expect out of Drew Hutchison?

I love Brieske for the future. I think that thanks to his high spin rate fastball and his great changeup he has a future as a backend starter. That being said this is about results rather than potential and in that regard he’s been fine. He’s had a couple duds but also a few gems which was incredibly unexpected I would say for most people.

I could legitimately copy paste the paragraph about Drew Hutchison and change the name and no one would bat an eye. He’s been serviceable as an innings eater and has managed a few deep starts which is all you can ask for.

Similarly to Drew and Rony, Piñeda is an inning eater. He’s serviceable in that regard.

Not much else I can say.

Elvin is another emergency call up and in his few starts he’s been pretty bad. That being said he has tipped his pitches on multiple occasions (one famous one being the game against the Yankees) but his stuff is there so he might be decent in the future? Regardless… meh.


That’s it for our starters now let’s talk about our bullpen.

Chafin has been an excellent signing. A 2.22 ERA makes it so that I’m generally very comfortable whenever he comes into the game and aside from a couple of ugly ish outings he’s going to be very appetizing trade bait during the deadline.

Lange has also been excellent. 2.29 ERA and another guy who I trust to get us out of scary situations. Should’ve been our All Star in my opinion.

Jimenez has improved a ton this season thanks to both his willingness to change and the magician that is Chris Fetter. Thanks to that he’s become a surprisingly reliable arm when the time comes. I don’t feel as comfortable with him as with Lange, Chafin or Fulmer but he’s been solid.

Speaking of Fulmer, he’s been great. His peripherals aren’t as pretty as his other numbers (particularly his xFIP of 4.76) but his actual performances have been very nice aside from a couple of duds (including a particularly painful one a few days ago).

Soto scares me. Whenever he comes in to close a game it feels like a coin flip: Is he going to walk a batter and blow the save? Or is he going to strike out the side? He’s inconsistent. When he’s good he’s GREAT when he’s off… we don’t talk about it.

Earlier in the season it was looking like he had broken out completely but he’s done some serious regressing to the mean recently going from being lights out in April and May to having an ERA of over 5.00 in July. There was some improvement though.

Foley coming into the season for me was not a terribly promising reliever. His peripherals in his brief stint in the MLB in 2021 were gross and projection systems did not like him coming into 2022. Seeing him sport an ERA of 3.24 is a pleasant surprise. Some of his peripherals still look a little ugly but he makes for a great mid to low leverage guy.

Wily has only started a single game for the Tigers this season which is pretty surprising. Seeing him out of the bullpen though he’s been a great long relief guy. His ERA of 2.16 is definitely not going to be sustained but for what he is he’s perfectly fine. Maybe he should get a few starts?

That does it for all qualified bullpen arms and players in general I wanted to grade and review… I will probably write a review on Hinch and the FO after the trade deadline and draft are done, but that’s all I have for now. Thank you for reading this monster.

P.S If you write for BYB consider this my job application for being a contributor lol.


This is a FanPost and does not necessarily reflect the views of the <em>Bless You Boys</em> writing staff.