Javier Baez has been one of many whipping boys for the Tigers offense this season. His career low (excluding seasons with less than 300 PAs) 80 wRC+ combined with his many strikeouts, hilariously terrible whiffs and his flamboyant attitude has made him an easy target despite him performing as advertised on defense (76th percentile in OAA). That led me to one simple question. Why? What has changed from his 116 wRC+ 2021 to his 80 wRC+ 2022.

Baez’s playstyle is simple: Dingers> Everything. He swings a ton and goes absolutely all out every single PA trying to hit the ball out of the ballpark. This of course leads to him striking out a ton and rarely ever walking. One would think then, that his issues this season would be caused by a career high in strikeouts or whiffs. Something along those lines. Yet almost the opposite has been true. Baez has a 24.6% K% this season that puts him well below average in that regard but compared to his career he’s only striking out 0.6% more than his career lowest. In fact you could say that his K% has been by far his biggest improvement this season in terms of his bat. If you look at other peripherals such as chase% and whiff% you’ll also notice that there’s nothing particularly bad about them compared to Javi’s usual numbers. Sure he’s literally in the 1st percentile in chase% and isn’t far behind in whiff%, but he’s always been this way. It is in no way unusual for him to be bad at these things. That’s not the problem.

Throughout Javi’s career the reason he’s been able to get away with such poor discipline is his incredible batted ball quality. Javi’s best seasons have all come when he’s been able to get the most out of the balls he does manage to hit. Javi’s been above average in his career in xwOBACON (xwOBA after contact) meaning that when he does hit the ball he’s going to hit it well. His Hard Hit%, Average exit velocity and especially his barrel% have been consistently in the upper echelon of baseball. Except in 2022 where he’s sharply declined in all metrics and has been well below average in all except barrel% where he’s simply just average.

Baseball savant has a tool called a swing take visual. This chart splits the strike zone into 4 different areas. Heart, Shadow, Chase and Waste. It then shows you the run value of a given player on pitches in said area. If we look at Javi’s 2021 season in which he posted a 116 wRC+ you’ll notice a few things: 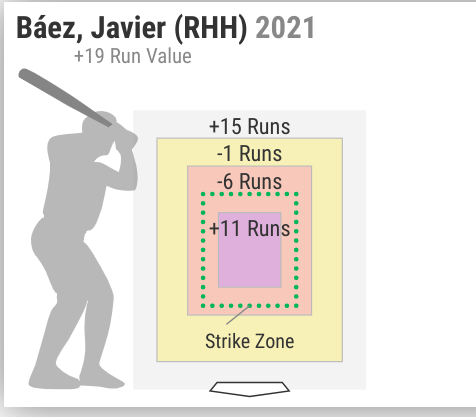 The first one is that as expected he bled six runs in the shadow of the plate. These were all swing runs lost meaning that he was chasing pitches out of the zone and whiffing at them. The other thing I wanted to highlight was his +11 runs in the heart of the zone. This is exactly where you would expect Javier Baez to bring his most value. Punishing those pitchers who dare challenge him and destroying baseballs. Then you move over to 2022: 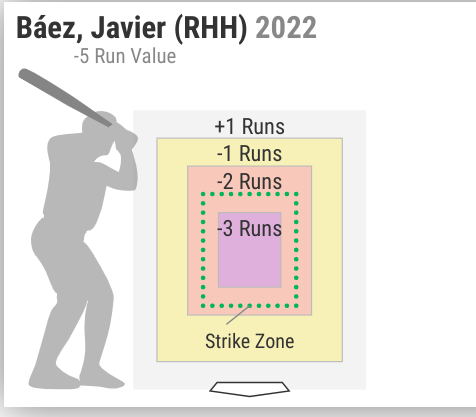 Things start to look even weirder when you start examining Javi’s plate discipline numbers in baseball savant. His swing% as a whole has been typical compared to his career average yet his zone swing% is 7.3% lower than his career average and perhaps even more bafflingly his meatball swing% has gone down over 10% from his career average this season! That prompted me to look at his career statistics against meatballs, and it was not pretty. Not since 2016 had Javi had an average exit velocity of under 94 mph on meatball pitches! In 2022, he’s FAR below that speed with an average exit velocity of 91.4 which is just barely not a career low. To make matters more interesting he’s also hitting these balls at a career low average launch angle of 8.5. Not only that but his xwOBA and wOBA are at a career low for these types of batted balls!

The more you look into Javi the more obvious it becomes in my mind, that there is something wrong with his swing. Javi is hitting ground balls at a career high rate, even against meatballs he still has a 50% groundball rate. If you look at his career rates he’s also topping balls more often than he ever has in career (albeit by only 3%). Thanks to all these things his batted ball quality and his effectiveness as an offensive player has fallen off the Grand Canyon! The strangest part however, is that there is no obvious culprit. He’s 29 years old so it’s unlikely that his age is a problem. You could try and blame Scott Coolbaugh, the Tigers much maligned hitting coach, but it’s not like he suddenly started getting on top of balls in 2022 as last season he had a similarly high rate of getting on top of balls without the sharp decline in batted ball quality. The easiest answer to this question then in my mind is that some unknown combination of factors (possibly even some kind of injury) has been affecting his swing and have led to this downer of a season for the Puerto Rican infielder.