An Introduction to Jesus Ustariz

Even the most casual of fans can name the top guys in the Tigers system, as guys like Nick Castellanos, Avisail Garcia, and Bruce Rondon have generated tons of press over the last year or so. But what about the lesser-known, really young guys? How about this guy, Jesus Ustariz? Well, here's your chance to get to know him.

Share All sharing options for: An Introduction to Jesus Ustariz 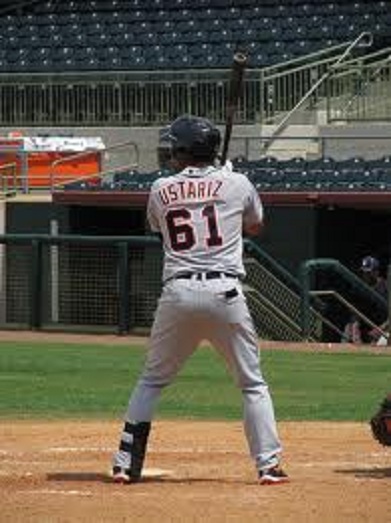 We all know how the Tigers love to acquire guys from Venezuela. Obviously the discussion begins with the guys already on the team; namely Miguel Cabrera and Victor Martinez. In the minor leagues you’ve got Avisail Garcia, Bruce Rondon, Danry Vasquez, the Paulino brothers (Brenny and David), among others. One Venezuelan not named here is a guy the Tigers may have struck gold with…or a guy we may have overrated: Jesus Ustariz.

Before I proceed, I have to mention that Ustariz is only 19 and has only been stateside for one season: this past season when he played rookie ball and saw his average and slugging both drop over 40 points. Videos of him hitting are few and far between, so a lot of this is conjecture based on the direction of the big league club. But some of it isn’t.

Let’s fast-forward a few years. Say the Tigers are still contenders. Maybe we’re still celebrating their victory over the Reds in the 2013 World Series, maybe not. Miguel Cabrera is 32. Prince Fielder is 31. Victor Martinez is probably no longer a Tiger. Either Cabrera or Fielder will be DHing, but let’s say for argument's sake that for one reason or another, the Tigers need some new, young blood to step in. Enter Jesus Ustariz.

Here’s what I do know about Ustariz: he can’t field. The Tigers tried him in left field and it failed. They tried him at third base and it failed. They even slotted him at catcher for a game and he allowed four stolen bases in four tries. They shifted him over to first base in 2012 and it worked better, but not good enough to merit serious consideration at that position moving forward. The potential in his bat; however, has the potential projection to make up for his defensive deficiencies. At 17 years old in 2010, he hit .281/.372/.363 in the Venezuelan Summer League. He struck out only 20 times in 196 plate appearances (171 at-bats) and grounded into only three twin-killings. In 2011 he hit .324/.386/.455/.840 for the same team and in one more plate appearance than 2010 only struck out one more time. Despite the low strikeout totals, he is an early-count swinger; he only walked 14 times in 2011 after being issued 23 free passes the year prior. Finally, in 2012, he made it stateside and hit .282/.379/.411 over 196 plate appearances 163 at-bats) and was only doubled up once. He also hit 13 doubles, so he flashes at least gap power as a teenager (sorry, not everyone can be like Bryce Harper).

A potential problem with Ustariz is his lack of power. He’s hit only seven homers over his three seasons in the Tigers’ system, and it’s always preferable when your DH has power. However, it’s not a necessity, as 2011 Victor Martinez (12 homers, 103 RBI) can attest. Perhaps this lack of power is due to his size; he’s 6’1’’ and his weight is listed at 192 pounds. I’m going to go out on a limb here and say those are somewhat generous numbers. He’s kind of fallen into the same trap Danry Vasquez (don’t worry, we’ll get to him later) has: he’s got no muscle. I think his conditioning will improve as he gets older and we’ll start to see him flash 15-20 homer power.

As for an ETA, I would tentatively say 2016 if his development and maturation both remain on schedule. He’s only 19. Victor will be here through 2014, most likely. Miggy is signed through 2016 but I can’t imagine the Tigers letting him get away. Prince’s contract is up in 2020 but I doubt he’ll still be a Tiger then. Could Jesus Ustariz end up as the first baseman or DH of the future? Stay tuned.