You've all heard about pitching prospects Casey Crosby, Andy Oliver, Bruce Rondon, and Jake Thompson. Or maybe even more well-known guys like Michael Morrison or Matt Hoffman, both of whom just pitched in the Arizona Fall League. Well, I'm here to introduce you to a 2012 draftee who may well be our next shut down reliever: RHP Will Clinard

Share All sharing options for: Prospect Profile: RHP Will Clinard 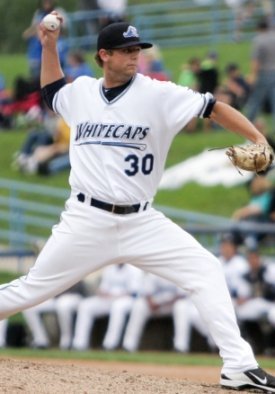 The Tigers have power arms up and down the organization. I know, it's shocking (sarcasm). Their track record of developing these power arms under Dave Dombrowski has ranged from excellent (Verlander, Justin) to work in progress (Porcello, Rick) to...um, well, failure (Sleeth, Kyle). However, those are all starting pitchers. Under Dombrowski, the Tigers haven't developed any great relievers. Sure, you can make a case for Fernando Rodney and Joel Zumaya, but neither of them were great for a particularly long stretch and neither of them are Tigers right now. However, Dombrowski's plucked some excellent potential in the draft and from Venezuela. Bruce Rondon is the heir apparent to the closer role. Logan Ehlers and Joe Rogers both have starter or late-inning potential. But the guy we're going to look at today is a guy I really like and could move through Detroit's system quickly: Will Clinard.

Clinard was drafted in the 18th round of the draft (604th overall). The 23 year-old righthander played college baseball at Vanderbilt, where he pitched in the College World Series in 2011. He's a pretty sizable guy; he stands 6'4'' and weighs in at 225 pounds. Once signed he was placed in Connecticut, where he posted a 1.38 ERA and two saves in seven appearances, recording 19 strikeouts to only two walks in 13 innings. He was then promoted to West Michigan, where he posted a 2.96 ERA in 14 appearances (24.1 innings) and recorded 20 strikeouts to seven walks. He also notched two more saves. All told, he went 3-2 with a 2.41 ERA and four saves in 2012, with a K/BB ratio of 39/9.

Clinard's got a fastball that can hit the mid-90's, but who doesn't have that these days? He's also got a so-so slider that shows some promise, but that pitch is far from his calling card. So how is he able to achieve this success? Well he's an excellent control pitcher and he's got a secret weapon: a cutter. Clinard's cutter has been called "dynamic." It's been referred to as a "wipeout" pitch. Scouts say it has enough bite to look like a second slider. Most impressively, he doesn't let it get away from him. He's able to use it both as a swing-and-miss pitch, as well as a pitch used to elicit weak contact, both of which are equally impressive nuances of the pitch.

Where will he start 2013 and when could he be pitching in Detroit? Will he be converted into a closer? My guess is that he starts in Lakeland. He wasn't overpowering in West Michigan, but with guys like Benoit and Dotel beginning to reach the end of the line on the big league club, the team may want to move the ex-Commodore up quickly. As he progresses through the system, though, he might have to develop another putaway pitch (this is what has doomed Porcello in the past). If he's successful in Lakeland, he'll probably be in Erie by the end of the year. Projections further beyond that can be tricky and are contingent on secondary pitch development and maintaining command. The earliest I could see Clinard in Detroit would be early 2014, but an ETA of late 2014-early 2015 seems more realistic. As for closing, I doubt it, considering Rondon is tearing up the minors. If Rondon or a free agent-signing flames out, then Clinard may find himself working the 9th inning at some point. The point is: keep an eye on him.