The Curious Case of Brenny Paulino

Brenny Paulino has held prospect hound's attention for a few years now, but is relatively unknown to the average fan. After missing 2012 due to shoulder surgery, his future is very much in question. What's next for the flame-throwing right hander who oozes projection and potential? Is he a future reliever? Where will he start in 2013? What should fans look for?

Share All sharing options for: The Curious Case of Brenny Paulino 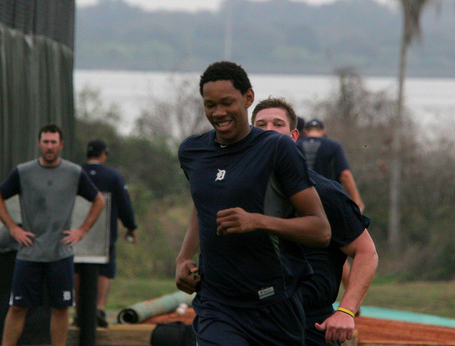 Savvy Tigers fans know of some of the live arms present in the Tigers' system. Guys like Casey Crosby,Bruce Rondon, Drew VerHagen, and Jake Thompon are some of the more widely-recognized names currently throwing in the minor leagues. But there is one name in the Tigers' system that was once one of these heralded names and is now trying to work his way back to top-prospect status: Dominican-born right-hander Brenny Paulino.

Paulino is quite the intriguing specimen. A 6'4'', 170-pound teenager (he turns 20 in February), Paulino burst onto the scene in 2010 with the Tigers' Dominican Summer League team, showcasing a 96 mph fastball with sharp natural movement. That fastball helped him rack up 55 strikeouts in 46 1/3 innings (an average of 10.7 Ks per nine). His lack of command on that fastball and his underdeveloped breaking/off-speed stuff contributes to his horrid walk rate (8.7 per nine) and WHIP (1.71). However, he was able to work around these deficiencies for the most part; despite posting a 1-6 record in 16 games (15 of which were starts) he recorded a solid 3.88 ERA. For a 17 year-old, though, that number is better than solid.

Paulino spent 2011 between the Gulf League and Lakeland. He was excellent for the GCL Tigers, going 4-3 with a magnificent 2.36 ERA in 11 appearances, eight of which were starts. Most impressive about his time in the GCL was his ability to cut down on his walks (they were cut from 8.7 per nine in 2010 to 3.5 in 2011) while keeping his hits/9 ratio virtually identical (6.6 in 2010, 6.7 in the GCL). This occurred despite no radical improvements in his curve or his slider. His WHIP went down 57 points to 1.14 and all of a sudden the buzz surrounding Paulino was not IF he would be called up to the Tigers, but WHEN.

Paulino was promoted to Lakeland late in the season and hit a speed bump. He lost both of his starts in Lakeland and posted a 21.94 ERA. He walked nine in only 5 1/3 innings and uncorked three wild pitches. The Tigers shut him down after his second start, and he finished 2011 with a combined 4-5 record while posting a 4.41 ERA and recording 52 strikeouts in 51 innings pitched. Despite the terrible showing in Lakeland, Paulino was still regarded as one of the Tigers' best starting pitching prospects, despite his wildness. He was expected to take another step forward in 2012, but it was not to be; Paulino ended up undergoing shoulder surgery and missed the entire 2012 campaign, putting somewhat of a damper on his future.

There are obviously several questions regarding this lanky righty now: where does he go from here? Is he a starter or reliever from here on out? Will his fastball still be the talk of the scouting world? And perhaps most importantly, where will he begin 2013 (health permitting, of course)?

Brenny is very much a power pitcher, and shoulder troubles tend to spell doom for the "power" portion of a pitcher's repertoire. His curveball and slider were not nearly effective enough when he was healthy to be considered legitimate secondary and tertiary options. The Tigers have handled Paulino with kid gloves; in 29 career appearances (25 starts) he's only pitched 97 1/3 innings. The fact that he needed shoulder surgery despite this handling speaks to questionable mechanics and overall poor durability. That being considered, it makes perfect sense to convert Paulino into a short reliever.

Despite the command issues, his fastball and its tremendous movement could lead to tons of strikeouts, and he wouldn't have to worry as much about fully developing the curveball or slider (if he remained a starter he would obviously need to develop those pitches further). Plus, he wouldn't be left in a game situation nearly long enough to let his command get the better of him. This is contingent on his shoulder being fully healed and his fastball getting back up to that 94-96 mph range, which is quite honestly something that is up in the air.

As for where he should start next season, my best guess would be giving him another shot in Lakeland. He had already mastered rookie league before the promotion to Lakeland (where it became evident something was not quite right). So why not test the theory of him as a shutdown reliever and give him another chance in Lakeland?

The take-away message from all this? It might be make-or-break time for this enigmatic flamethrower. The only way he can escape a decrease in fastball velocity (which is very likely) is to develop his breaking pitches and develop them to the point where they can be just as effective as the fastball. If he is converted to a reliever and his fastball velocity is unchanged, then it should be all good. If the downtick does occur, he might not be able to reclaim top-prospect status with a fastball that tops out at 91 without much control. Brenny Paulino is definitely one to keep an eye on and is arguably the most intriguing lower-level prospect in the Tigers' system heading into 2013.